Subcritical nuclear tests conducted by U.S. in December 2010 and February 2011, not disclosed until June 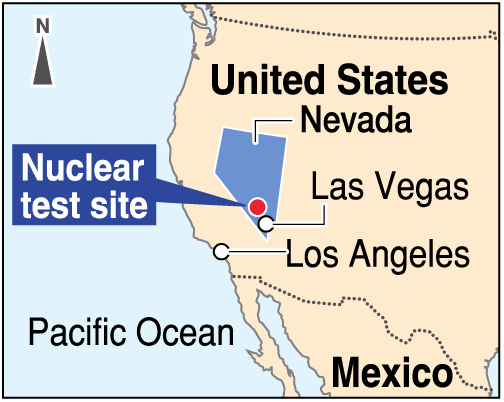 It was learned on July 19 that the Unites States Department of Energy conducted two more subcritical nuclear tests, one on December 1, 2010 and another on February 2, 2011. These tests were carried out at an underground test facility in Nevada. The first nuclear test conducted by the United States, after President Barack Obama took office, was held on September 15, 2010. The latest two tests were not made public until June of this year. Information on nuclear tests prior to this was typically disclosed right before or right after each test. Since information on the two latest tests was not disclosed for months, the transparency of U.S. nuclear activities is being called into question.

An official of the National Nuclear Security Administration (NNSA), in response to an inquiry from the Chugoku Shimbun, said that both experiments were carried out under the auspices of the Los Alamos National Laboratory, a facility located in New Mexico.

NNSA, which falls under the jurisdiction of the Energy Department, explained that one objective of these experiments was to ensure the safety of the U.S. nuclear arsenal. The United States has held 26 subcritical nuclear tests in total.

The United States has normally notified local residents and the media of nuclear tests immediately prior to a test taking place. However, with regard to the September 2010 test, the first such test under the Obama administration, the announcement by NNSA was made afterwards. For the latest two tests, NNSA posted a list of experiments conducted in support of the U.S. nuclear stockpile on its website on June 17, more than four months after the last test. The list, which includes both of the tests, is a public announcement, according to NNSA.

The United States has not ratified the Comprehensive Test Ban Treaty (CTBT), but it declared a moratorium on nuclear tests that produce an explosion in 1992. However, the nation has conducted subcritical nuclear tests since 1997.

Subcritical nuclear tests
In subcritical nuclear tests, which do not involve nuclear explosions, a small amount of nuclear material is used in order to prevent an occurrence of criticality or a self-sustaining nuclear chain reaction. These tests are intended to provide data which simulates how older plutonium affects the reliability of nuclear warheads. The United States has conducted such experiments within its national borders since 1997, and Russia has held similar tests in places like the Arctic region.