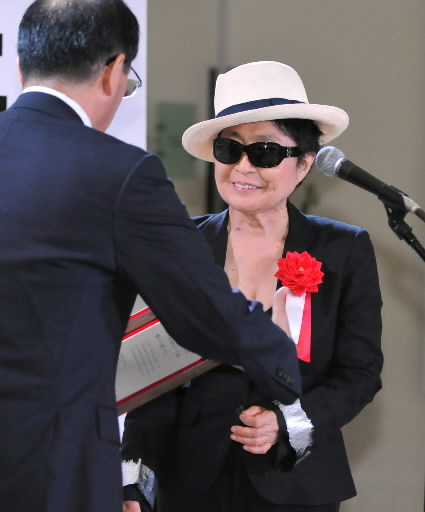 On July 29, Yoko Ono, 78, the artist and peace activist of international repute, was awarded the 8th Hiroshima Art Prize, an honor given to a contemporary artist who has made efforts to promote peace in the world. The prize is sponsored by the City of Hiroshima and other entities and is awarded every three years. The award ceremony and related events were held at the Hiroshima City Museum of Contemporary Art in Minami Ward, Hiroshima.

Receiving the certificate of merit from Kazumi Matsui, mayor of Hiroshima, Ms. Ono said, “After I received the surprising news that I would be given this award, the disaster of March 11 occurred. I felt as if the A-bombed city of Hiroshima was calling me to Japan.” At an exhibition of her work held in conjunction with the award, opening on July 30 at the museum, Ms. Ono displays her latest pieces which incorporate her desire to comfort the souls of the dead in the A-bombed cities of Hiroshima and Nagasaki and in the Great Eastern Japan Earthquake, as well as her hope.

Prior to the award ceremony, Ms. Ono visited Peace Memorial Park in downtown Hiroshima to tour Peace Memorial Museum. “All human beings have the obligation to see the horror of the atomic bombing firsthand,” she said. Referring to the atomic bombings and the accident at the nuclear power plant in Fukushima Prefecture, she shared her feelings by saying, “I'm sad and frustrated by the fact that these nuclear tragedies have taken place in Japan.” Then, at a press conference, Ms. Ono urged, “If everyone would do something small, whatever each person can do, the world would be a more peaceful place.”

Ms. Ono has long been active in the international art world from her base in New York. She was honored for her dedicated efforts to promote peace through appeals undertaken with her late husband John Lennon, among other activities.