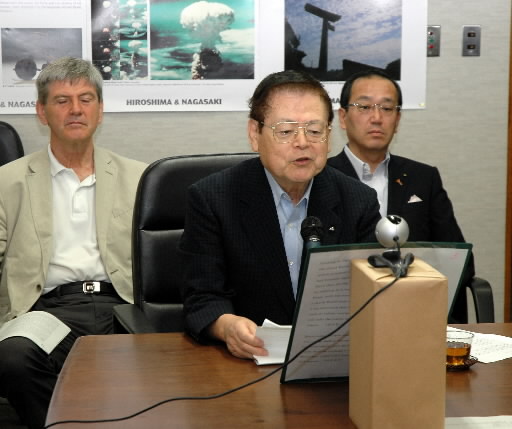 
Local doctors’ association holds A-bomb exhibition
An A-bomb exhibition opened in the city of Botucatu in the state of Sao Paulo, Brazil on August 2 (August 1, local time). Botucatu has also indicated that it will soon join Mayors for Peace. With the support of the Hiroshima Prefectural Medical Association, a local medical association has organized the exhibition. Shizuteru Usui, president of the Hiroshima Prefectural Medial Association, and Kazumi Matsui, mayor of Hiroshima, took part in the opening ceremony via a web conferencing system and pledged solidarity between the two cities in the quest to abolish nuclear weapons.

The web conferencing system linked Hiroshima Medical Hall, located in Nishi Ward, Hiroshima, and Botucatu Medical Hall, where about 100 people attended the event. Dr. Usui urged, “I hope the people of Brazil will grasp the horror of the atomic bombing, too. It's vital for us to come together in our peace building efforts.”

Addressing the participants in Brazil, Mr. Matsui said, “These first steps are needed to foster a peaceful world free of nuclear weapons.” Joao Cury Neto, the mayor of Botucatu, then expressed sympathy for the sufferers of the Great Eastern Japan Earthquake. He went on to say, “Working alongside Japanese cities and other entities, I would like to aim for the elimination of nuclear weapons by the year 2020,” and signed the registration form for Mayors for Peace.

Medical associations in Brazil have been displaying posters loaned from Hiroshima Peace Memorial Museum at traveling exhibitions in that nation since August 2010, with the cooperation of the Hiroshima Medical Association. The Hiroshima Medical Association and medical associations in Brazil have been engaged in such activities in conjunction with providing medical examinations for A-bomb survivors residing in South America.

On the opening day of the A-bomb exhibition, Steven Leeper, chairman of the Hiroshima Peace Culture Foundation, gave a commemorative talk and stressed, “Nuclear weapons have the potential to bring about the worst horror in the history of humanity. But by working together, we can prevent that horror, without a doubt.”