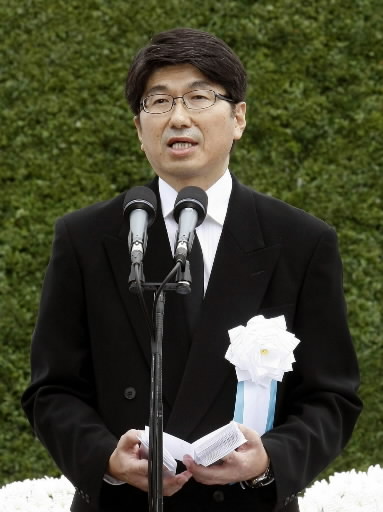 This March, we were astounded by the severity of accident at the Fukushima Daiichi Nuclear Power Station operated by the Tokyo Electric Power Company, Inc., after the occurrence of the Great East Japan Earthquake and ensuing tsunami. With some of the station’s reactors exposed to the open air due to explosions, no residents are now to be found in the communities surrounding the station. There is no telling when those who have been evacuated because of the radiation can return home. As the people of a nation that has experienced nuclear devastation, we continued the plea of “No More Hibakusha!” How has it come that we are threatened once again by the fear of radiation?

Have we lost our awe of nature? Have we become overconfident in the control we wield as human beings? Have we turned away from our responsibility for the future? Now is the time to discuss thoroughly and choose what kind of society we will create from this point on.

No matter how long it will take, it is necessary to promote the development of renewable energies in place of nuclear power in a bid to transform ourselves into a society with a safer energy base.

Many people once believed the myth of the safety of nuclear power plants, from some moment in the past to the occurrence of the nuclear power station accident in Fukushima.

What about the more than 20,000 nuclear weapons in the world?

Do we still believe that the world is safer thanks to nuclear deterrence? Do we still take it for granted that no nuclear weapons will ever be used again? Now seeing how the radiation released by an accident at just a single nuclear power station is causing such considerable confusion in society, we can clearly understand how inhumane it is to attack people with nuclear weapons.

We call upon all people in the world to simply imagine how terrifying it would be if a nuclear weapon hundreds of times more powerful than the Hiroshima and Nagasaki atomic bombs were to be exploded in the sky above our cities.

While intense heat rays would melt human beings and anything else nearby, horrific blast winds would fling buildings through the air and crush them instantly. A countless number of charred bodies would be scattered among the ruins. Some people would hover between life and death, while others would suffer from their injuries. Even if there were survivors, the intense radioactivity would prevent any rescue efforts. Radioactive substances would be carried far away by the wind to all corners of the world, resulting in widespread contamination of the earth’s environment, and in affecting people with a plague of health effects for generations to come.

We must never allow anyone in the future to experience such agony. Nuclear weapons are never needed. No reason can ever justify human beings possessing even one nuclear weapon.

In April 2009, President Barack Obama of the United States of America stated in his speech in Prague, the Czech Republic, that the U.S. will seek “a world without nuclear weapons.” Such a concrete goal presented by the most powerful nuclear weapons state raised expectations all over the world. While some positive results have certainly been achieved, such as the conclusion of an agreement between the U.S. and Russia on the reduction of nuclear weapons, no significant progress has been observed since. In fact, there has even been a regressive trend, such as the implementation of new nuclear simulation tests.

We call for U.S. President Obama to demonstrate his leadership toward realizing “a world without nuclear weapons,” and to never disappoint the people in the atomic-bombed cities or anywhere throughout the world.

The time has come for international society, including the nuclear weapons states of the U.S., Russia, the United Kingdom, France and China, to launch efforts toward the conclusion of the Nuclear Weapons Convention (NWC), which aims for complete abolishment of all nuclear weapons. As the government of the only nation to have endured atomic bombings, the Japanese government must strongly promote such efforts.

We encourage all of you who seek “a world without nuclear weapons” to also organize an atomic bombing exhibition, even if it is a small-scale event, in your own cities in cooperation with Nagasaki. We look forward to photography panels of the atomic bombings being exhibited in streets all over the world. It is our hope that you join hands with people from the atomic-bombed cities and extend the circle of peace so all people can live a humane life.

On August 9, 1945 at 11:02 a.m., Nagasaki was destroyed by an atomic bomb. From the ruins, we have accomplished our restoration as a city of peace. We hope that people in Fukushima will never give up and that people in the affected areas of eastern Japan never forget that across the world are friends who will always be behind them. We sincerely hope that the affected areas will be restored and that the situation with the nuclear power plant accident settles down as soon as possible.

We offer our sincere condolences on the deaths of all the victims of the atomic bombings and the Great East Japan Earthquake, and together with the city of Hiroshima, pledge to continue appealing to the world for the complete elimination of nuclear weapons.