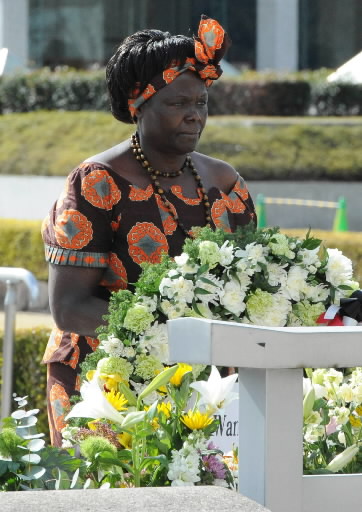 Wangari Maathai, the 2004 Nobel Peace Prize laureate and environmental activist from Kenya, died at a hospital in Nairobi on September 25, 2011. She was 71 years old. According to the Green Belt Movement, an NGO engaged in efforts to plant trees and prevent deforestation, Ms. Maathai had been receiving treatment for ovarian cancer.

On September 26, when residents of Hiroshima learned of her passing, those who had contact with Ms. Maathai when she visited the A-bombed city expressed surprise and regret at the news of her death.

Ms. Maathai was a champion of nuclear abolition as well. She was one of the 17 Nobel Peace Prize laureates who signed the Hiroshima-Nagasaki Declaration, a statement calling for the abolition of nuclear weapons that was released by the Chugoku Shimbun in 2009. In February 2010, Ms. Maathai came to Hiroshima to learn about the reality of the atomic bombing and engage in exchanges with A-bomb survivors and youths.

Keijiro Matsushima, 82, a resident of Saeki Ward, Hiroshima, had shared his A-bomb experience with Ms. Maathai at the time. Recalling this encounter, he said, “Ms. Maathai shed tears as she told me the bombing should never be repeated. Her feelings seemed very genuine.”

Steven Leeper, chairperson of the Hiroshima Peace Culture Foundation, mourned her loss, and said, “As nuclear weapons are utterly contrary to the idea of preserving the environment, she understood their horror well.”

Naho Kageyama, 18, a first-year student in the faculty of International Studies at Hiroshima City University, planted A-bombed cherry trees with Ms. Maathai in Hiroshima Peace Memorial Park. Ms. Kageyama said, “I can’t forget her telling me to do my best at the things I can now.” Katsushi Aoyama, 18, a third-year student at Koryo High School, also took part in the tree-planting with Ms. Maathai. “She encouraged us to be aware of issues involving garbage,” he said. “She seemed fine at the time.”