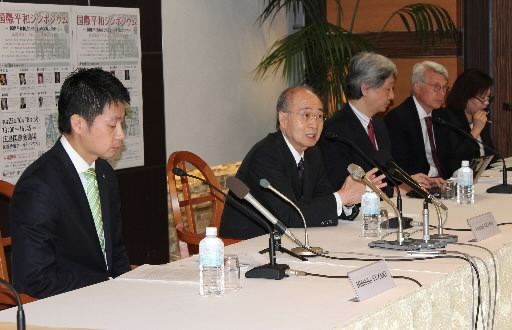 On October 17, the committee charged with formulating Hiroshima Prefecture’s “A Hiroshima for Global Peace” plan, chaired by former UN Under-Secretary General Yasushi Akashi, reached a final agreement on a plan in which Hiroshima would serve as a base for research and personnel development aimed at peace building and the abolition of nuclear weapons.

A total of 13 people, including Mr. Akashi and committee members Yoriko Kawaguchi, the former Japanese minister of foreign affairs, and Hiroshima Governor Hidehiko Yuzaki participated in the final meeting held in Minami Ward, Hiroshima. Members of the project’s task force, including researchers from Hiroshima University and Hiroshima City University, also took part in the meeting. Following a closed discussion that lasted seven hours, the members of the committee held a press conference.

The plan seeks for Hiroshima Prefecture to play an active role in the process of reducing the number of nuclear arms in the world and contributing to peace-building activities. Examples include assessing international efforts to abolish nuclear weapons, such as the review conferences for the Nuclear Non-Proliferation Treaty (NPT), and developing and training personnel involved in peace-building activities.

To put the plan into action, the need for devising a system to gather funds and developing a network of research facilities inside and outside Japan was emphasized.

Along with these aims, there were calls for an international conference on peace building to be held regularly in Hiroshima. Mr. Akashi commented, “We were able to compile a range of proposals on the role of Hiroshima as an A-bombed city. Our focus now is on how the international community will respond to this initiative.”

The final draft, with the details resolved, will be completed this month. In early November, Governor Yuzaki will visit the United States and make appeals to UN Secretary General Ban Ki-moon and U.S. government representatives for cooperation in the realization of the plan.