U.S. Consul General offers flowers to the Cenotaph for the A-bomb Victims 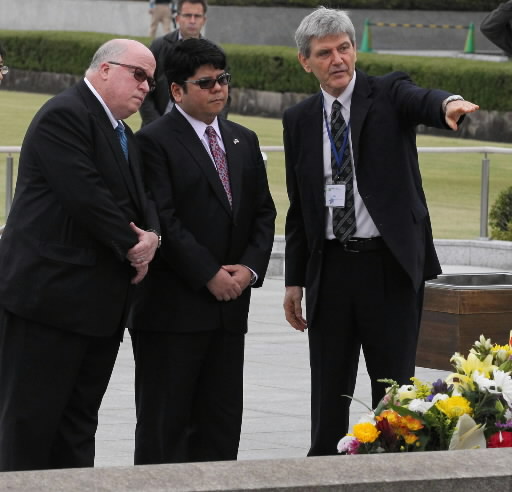 On November 3, Patrick Linehan, the United States Consul General in Osaka-Kobe, visited Hiroshima Peace Memorial Park and offered flowers to the Cenotaph for the A-bomb Victims. Although Hiroshima Mayor Kazumi Matsui had urged Mr. Linehan to read aloud the inscription “Let all the souls here rest in peace for we shall not repeat the evil” during their meeting on the previous day, Mr. Linehan made a silent offering of the flowers.

He also visited such facilities as Hiroshima Peace Memorial Museum, guided by Steven Leeper, chairman of the Hiroshima Peace Culture Foundation. Mr. Linehan also listened to Keijiro Matsushima, 82, of Saeki Ward, recount his experience of the atomic bombing. Although he did not answer questions from the press, he released a statement saying, “I hope that this visit will express President Obama’s vision for a nuclear-weapon-free world.”

On the same day, Mr. Linehan took part in an event celebrating Honolulu, Hawaii, one of Hiroshima’s sister cities.