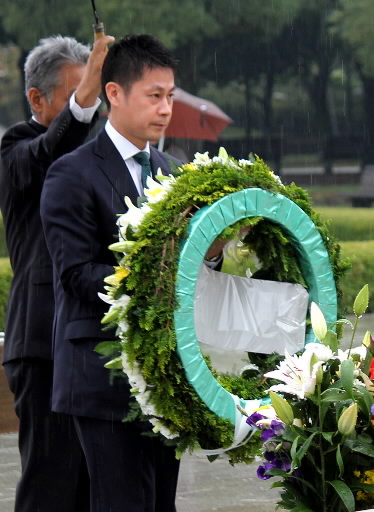 Hiroshima Governor Hidehiko Yuzaki visited Pearl Harbor on November 5, offering flowers at the USS Arizona Memorial. This marked the first time a governor of Hiroshima Prefecture has paid an official visit to the U.S. memorial site. Pearl Harbor, located on the Hawaiian island of Oahu, is where the Pacific War broke out. Mr. Yuzaki’s visit was the first stop on his trip to the United States to promote a “Hiroshima for Global Peace” plan.

Inscribed on the memorial, which lies above the wreck of the USS Arizona, a battleship that sank as a result of the Japanese attack, are the names of the victims. Guided by chief curator Daniel A. Martinez, Mr. Yuzaki placed a wreath in front of the monument and scattered flower petals on the water above the sunken battleship.

The governor then visited the National Memorial Cemetery of the Pacific at Punchbowl, where those killed in the Pacific War have been laid to rest. G.E. Castagnetti, a military veteran and director of the cemetery, guided Mr. Yuzaki. He welcomed the Hiroshima governor’s visit, saying the United States and Japan can appeal to the world for peace by sharing goodwill.

“Visiting this place, where, like Hiroshima, there are victims of the war, was a moving experience,” Mr. Yuzaki said. “My resolve has been renewed as I make efforts to help eliminate nuclear weapons.” During his trip to the United States, he will appeal to UN Secretary General Ban Ki-moon and others for their cooperation with regard to the prefecture’s plan, which articulates Hiroshima’s role in the pursuit of nuclear abolition.