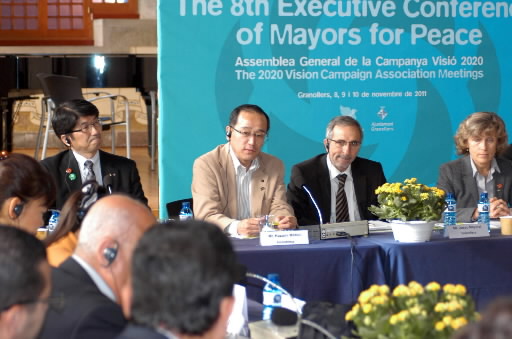 The executive conference of Mayors for Peace, for which Hiroshima Mayor Kazumi Matsui serves as president, opens on November 9 in Granollers, Spain. For two days, until November 10, along with discussion concerning future efforts to promote nuclear abolition, Mr. Matsui is set to propose that the member cities share in the expenses of running the organization.

The mayors and representatives of 11 executive cities, including Manchester (United Kingdom), Halabja (Iraq), and the A-bombed cities of Hiroshima and Nagasaki will take part in the conference. They will also discuss the agenda for the general conference to be held in Hiroshima in 2013.

This gathering marks the first time that Mr. Matsui, who assumed the office of mayor in April, will participate in an executive conference. His leadership ability will be tested in uniting over 5000 member cities and inspiring the group’s effort to advance the abolition of nuclear weapons. The mayor will also propose establishing regional chapters around the world.

In addition, Mr. Matsui will broach the current state of affairs in which the cities of Hiroshima and Nagasaki shoulder all the operating costs to maintain Mayors for Peace. As member cities have been invited to join the organization with the understanding that no fees would be required for participation, opinion on this matter is expected to be divided. The idea of holding all future executive conferences in Hiroshima and Nagasaki will also be proposed.

Mr. Matsui arrived in Granollers on the night of November 7. On November 8, he took part in a board of directors meeting for the “2020 Vision Campaign,” an effort led by Mayors for Peace which seeks the elimination of nuclear weapons by 2020, and discussed their action plan for 2012.

The mayor commented: “The issue of managing the costs of the organization so that Mayors for Peace can continue its activities throughout the world over the long term is something that must be discussed. I hope to pursue discussion on this matter while bearing in mind the financial concerns of each member city.”