Mayors for Peace conference opens in Spain with 50 participants, including Hiroshima and Nagasaki mayors 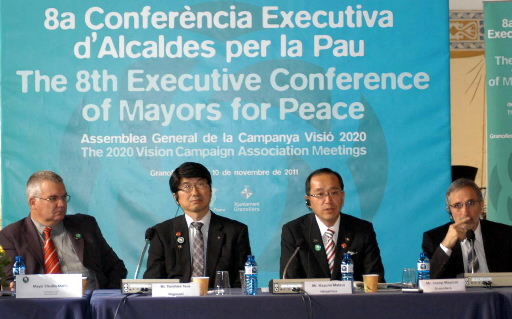 The executive conference of Mayors for Peace, with Hiroshima Mayor Kazumi Matsui presiding as president, opened on November 9 in the city of Granollers in eastern Spain. Mr. Matsui revealed a request that member cities share in the operating costs of the organization. The participants will discuss whether to include this idea in the declaration to be produced on November 10, the final day of the conference.

The 50 participants include the mayors and representatives of member cities and such executive cities as Hiroshima and Nagasaki.

In his opening address, Mr. Matsui said, “I would like to exchange views on the future operations of Mayors for Peace, particularly in terms of financial issues and ways to strengthen the foundation of the organization.” In this light he presented the idea of sharing the body’s operating costs.

Following Mr. Matsui’s speech, Steven Leeper, chairman of the Hiroshima Peace Culture Foundation, presented a number of proposals on how such costs might be divided among member cities. Based on calculations indicating that the annual operating costs for the organization amount to an average of 29.34 million yen, the ideas include determining shares in line with the financial state of the nation of each city member, and asking the executive cities to cover the bulk of the expense.

Other proposals, such as establishing regional chapters around the world, and fixing Hiroshima and Nagasaki as the location for future executive conferences, have been made during the conference. Nagasaki Mayor Tomihisa Taue’s idea of holding events such as A-bomb exhibitions in each member city in August 2012, to commemorate the fact that Mayors for Peace has grown to over 5,000 members, was met with agreement.