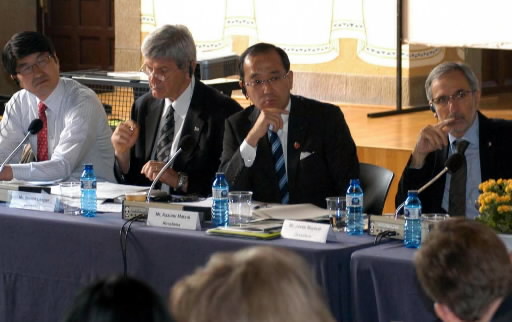 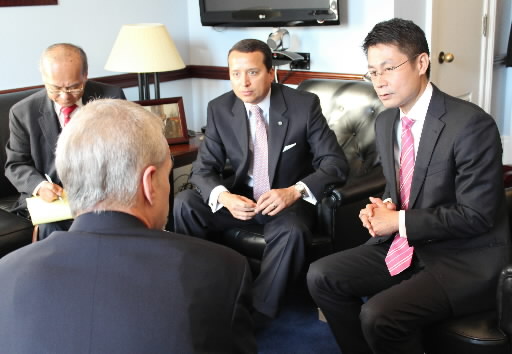 Kazumi Matsui, mayor of Hiroshima City, and Hidehiko Yuzaki, governor of Hiroshima Prefecture, are both making efforts to appeal for the abolition of nuclear weapons during visits to Europe and the United States, respectively. For the two leaders of an A-bombed site, this debut in “peace diplomacy” is turning out to be full of both positive feedback and challenges for the future.

On November 9, the executive conference of Mayors for Peace opened in the city of Granollers, in eastern Spain. At the start of the gathering, Mayor Matsui, who serves as the president of the body, expressed his concern that “a shadow has come over the effort to abolish nuclear weapons.” He appealed for solidarity among the mayors in attendance.

Mayors for Peace, with the international prominence of the A-bombed cities of Hiroshima and Nagasaki behind it, has attained a membership of over 5,000 cities around the world. In order for this network to grow into an organization that can take more concrete action, Mr. Matsui called attention to the burden of its operating costs.

Because the member cities have joined Mayors for Peace under the assumption that fees would not be required, it is unclear how the matter will be resolved as the conference discussion continues. However, Mayor Matsui stressed that “The three essential elements for accomplishing anything are people, materials, and money. Mayors for Peace does not have enough money.”

Meanwhile, on November 8, Governor Yuzaki conferred in Washington, DC with Afghanistan’s ambassador to the United States and the Chief of Staff for the House of Representatives. He stressed that with the prefecture’s a “Hiroshima for Global Peace” plan, he hopes to “create a roadmap toward nuclear abolition by gathering personnel, expertise, and funds from across the world.”

The press conference at the National Press Club, where media from the world’s nations gather, was expected to be a valuable opportunity to promote the prefecture’s plan, but no foreign media attended the session. Mr. Yuzaki expressed disappointment, saying, “I was hoping to convey my message to the U.S. media, but I have to accept the reality that interest in nuclear disarmament is now low in the United States.”

On November 9, the governor will appeal for Secretary General Ban Ki-moon’s support of the plan at U.N. Headquarters in New York.