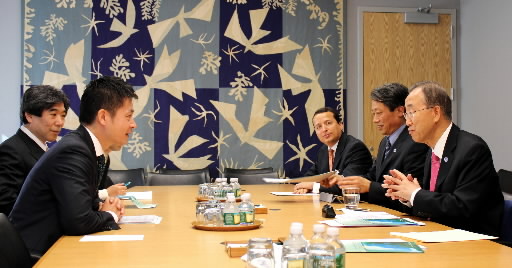 In a meeting with U.N. Secretary General Ban Ki-moon on November 9 at U.N. Headquarters in New York, Hiroshima Governor Hidehiko Yuzaki appealed for U.N. support for a “Hiroshima for Global Peace” plan, which outlines the role that Hiroshima could play in the effort to abolish nuclear weapons and advance peace-building in the world. Mr. Ban responded that he would back the project by making use of the U.N. network and human resources.

The meeting behind closed doors lasted 30 minutes. According to Mr. Yuzaki, who held a press conference following the meeting, Mr. Ban had commented that on a personal level, he had decided to advocate for disarmament and reductions in nuclear weapons, and that this was a meaningful plan and the United Nations would be glad to offer its support. The secretary general paid visits to Hiroshima and Nagasaki last year, and has proposed that the global community pursue a nuclear weapons convention.

Mr. Yuzaki expressed high hopes for the plan, saying, “The support of the United Nations will help facilitate the goal of making Hiroshima a hub for peace in the world. With U.N. support, the international community will be more receptive to the idea.”

The governor also appealed for support in connection with Hiroshima City’s effort to host the 2015 review conference for the Nuclear Non-Proliferation Treaty (NPT).

With Hiroshima serving as a base, the global peace plan aims to eliminate nuclear weapons from the world and resolve conflicts by holding international conferences and training personnel for peace building activities.

Prior to the meeting with Mr. Ban, Mr. Yuzaki visited “Ground Zero,” the site of the 9/11 terrorist attacks in New York, and offered a wreath of flowers.