Workers come and go at “J Village,” base of operations for the Fukushima nuclear plant 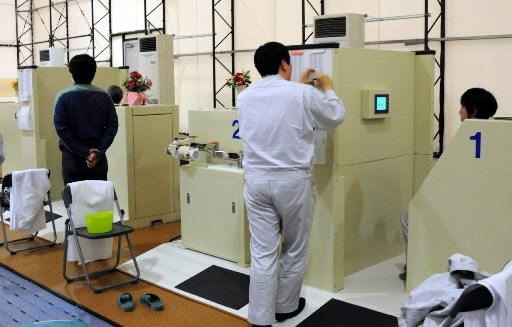 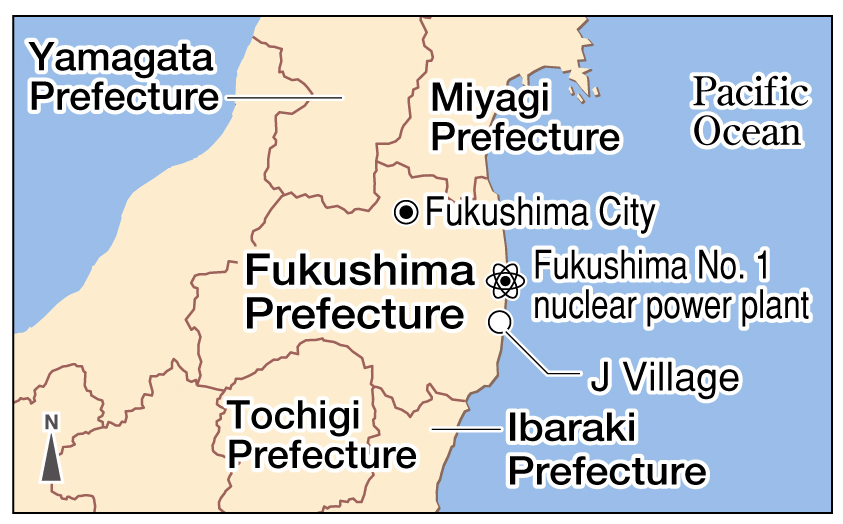 Workers in protective gear come and go from a cluster of buildings sitting atop a grassy area. Dubbed “J Village,” the facility is located on the boundary of the towns of Naraha and Hirono in Fukushima Prefecture. “J Village” serves as the base of operations for the Tokyo Electric Power Company (TEPCO) as they respond to the accident at the Fukushima No. 1 (Daiichi) nuclear power plant. On November 11, “J Village” was opened to the press for the first time in the eight months that have passed since the disaster occurred. Originally, the site was established as a select facility for soccer, but it has been transformed into an eerie place where an “extraordinary life,” which sees workers carrying on with their efforts to contain the terror of radiation resulting from the accident, is distinct from the “ordinary life” around it.

A locker room holds a large supply of white protective gear, including caps and gloves. Three male workers donned the gear over their work uniforms. Then, placing masks over their faces and taking up meters that measure levels of radiation, they boarded a bus headed for the crippled nuclear plant, a distance of 20 kilometers from “J Village.”

Around 3,000 workers move through the facility each day. When the workers return from the plant, they go through the “gate monitor” and reach the “clean area” that stands outside the radius of 20 kilometers from the power station.

In the center building, a worker was eating a light meal of soup and dumplings in a dining room. The man, 59, who is involved in construction work, said, “I do what I can, as far as possible, not to enter the contaminated area.” The level of radiation exposure of each worker is monitored via the bar code on their name tag. The facility also holds a total of 12 whole body counters, devices that can detect internal exposure to radiation, enabling checkups to run smoothly since last month. The workers are said to undergo monthly checkups.

After each shift at the nuclear plant, the workers’ protective gear is treated as radioactive waste. This gear is discarded in iron containers of one square meter, sitting under a roof on the soccer field, but how to dispose of it has yet to be determined. The number of such containers has already reached 4,000, with capacity for 2,000 more.

Dormitory buildings with 1,000 rooms for single TEPCO employees also stand on the soccer field. This housing was completed in September. Only the scoreboard reveals how this area was once used to play soccer. When the spirit of players and fans can return to this site, it’s impossible to say.