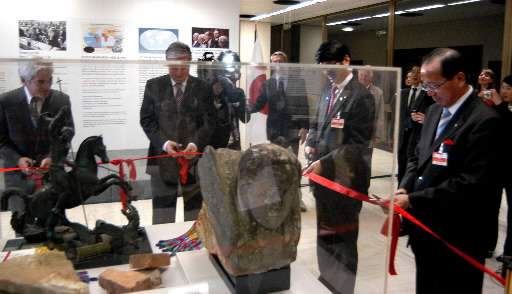 A permanent exhibition of A-bomb artifacts opened on November 11 at the European headquarters of the United Nations in Geneva, Switzerland. The mayors of Hiroshima and Nagasaki, which donated the artifacts, and staff members of international organizations, attended the opening ceremony. Hiroshima Mayor Kazumi Matsui stressed the significance of the exhibition, saying that he hoped the exhibition would convey the message that nuclear weapons are evil and threaten the very existence of humanity.

Hiroshima donated five items, including roof tiles and pottery seared by the bomb’s heat rays, while Nagasaki donated eight items, including a statue of an angel from the Urakami Cathedral, a church that was destroyed in the Nagasaki bombing. Panels showing photos of burn victims of the bombings and information about the global effort to abolish nuclear weapons are also on display.

In his opening address, Kassym-Jomart Tokayev, director general of U.N. Headquarters in Europe, said, “The exhibition renews our resolve to work toward the elimination of nuclear weapons.” Nagasaki Mayor Tomihisa Taue remarked, “I hope visitors will go on to learn about other aspects of this subject that we weren’t able to display” and expressed his wish that the exhibition would encourage people to visit the sites of the bombings.

Although a permanent A-bomb exhibition has existed at United Nations Headquarters in New York since 1983, this is the first exhibition at the headquarters in Europe. The display is found in a corner of the lobby, and will be included in tours of the building.