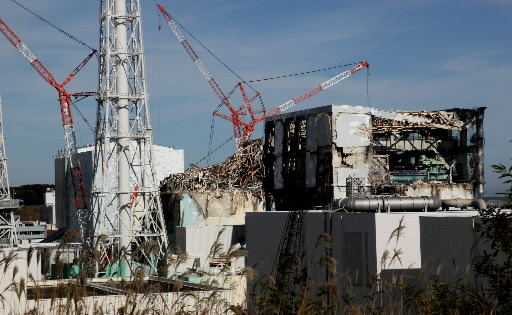 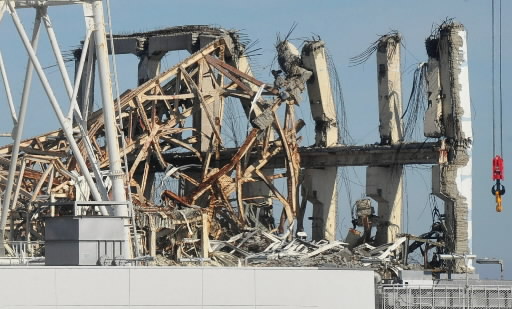 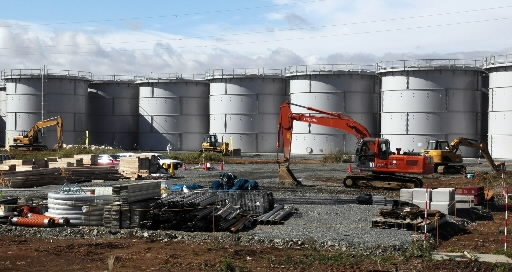 The disaster at the nuclear power plant in Fukushima has clearly demonstrated the horrors of the destructive force of the atom that Hiroshima has continually spoken out about. On November 12 Tokyo Electric Power Company’s No. 1 (Daiichi) nuclear power plant was opened to reporters for the first time since the accident. The reactor buildings whose tops were blown off by hydrogen explosions were an awful sight. There were numerous new tanks at the plant for the processing of water contaminated by radiation. I keenly felt the strong threat of invisible radiation.

J-Village, 20 km from the power plant, serves as TEPCO’s operating base. There I changed into protective clothing, donning two pairs of gloves made of cotton and rubber, a head covering and plastic booties over my shoes before boarding a bus. We drove along a road that had collapsed in places, and when we were 3 km from the plant we put on masks that completely covered our faces and passed through the main gate. I found it difficult to breathe with the mask on. At that point the radiation in the bus measured 15 microsieverts per hour, 10 times what it had been when we set out.

I was first surprised to see the rows and rows of tanks. The largest ones had a diameter of 12 meters and were 10 meters tall. The tanks occupy an area of 140,000 square meters on the plant premises. In order to bring the situation at the plant under control, it is necessary to continue to cool the reactors, so a huge amount of contaminated water is collecting day by day. High-level radioactive waste is discharged from foreign-made equipment used to lower the concentration of the contaminants in the water. A substantial concrete building has been built to store this waste temporarily.

The No. 4 reactor building (five floors above ground and one below) loomed to the northeast. As a result of the hydrogen explosion, the west wall from the third floor up had almost entirely collapsed, and the yellow cover of the reactor’s containment vessel could be seen through the building’s frame. On the south wall, the upper portion of the pool for the storage of spent nuclear fuel could also be seen.

Nothing remained of the roof of the No. 3 reactor building, which also suffered a hydrogen explosion. The building’s frame was exposed, and, although it was not the result of a nuclear blast, its twisted interior reminded me of Hiroshima’s A-bomb Dome.

We headed north toward the No. 1 reactor. Even eight months after the disaster, buildings that were destroyed by the tsunami and overturned cars could be seen. In front of the No. 3 reactor, the radiation level reached 1 millisievert, a high level at which the maximum annual dose for an ordinary person would be reached within one hour. When we were informed of this number, I was so shocked I momentarily stopped taking notes.

The No. 1 reactor had been covered. Three orange hoses snaked along the nearby roads. Each hose was attached to a pump on the bed of a truck. They appeared to be a “life-support system” for flooding the reactor with cooling water.

About 150 people, mostly TEPCO employees, filled the two-story crisis center, which occupies a seismically isolated building and serves as the “front-line base.” Masao Yoshida, chief of the plant, repeatedly told reporters that there was no question that the plant was stable. The walls of the stairway were covered with messages of encouragement and folded paper cranes that had been sent by people in Japan and abroad.

I saw people working outdoors all over the plant that day. I was concerned about the health of those workers, who are working in a difficult environment. If they should become ill, good support will be essential. This is a lesson we have learned from the atomic bomb survivors who are still suffering from the effects of radiation 66 years after the atomic bombing.