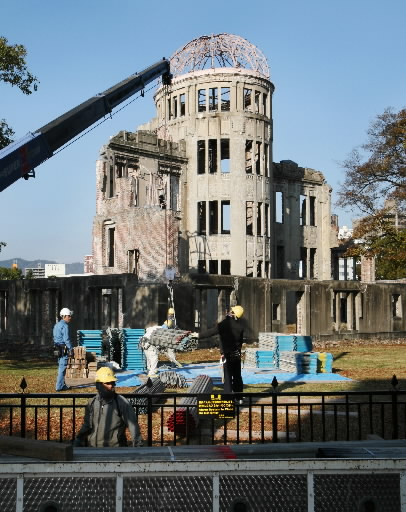 
First full-scale inspection for earthquake resistance
On December 14, the City of Hiroshima launched an effort to check the soundness of the A-bomb Dome, a World Heritage site located in downtown Hiroshima. This soundness survey, the first full-scale inspection for earthquake resistance employing computer analysis, seeks to confirm the state of degradation and other aspects of the aging structure. The data will be used as the basis of a preservation project in order to protect the dome from earthquakes.

On the first day of the survey, the firm carrying out the effort brought in construction materials to a spot on the east side of the dome. The workers began with such activities as putting up scaffolding and placing down boards inside the dome to cover scattered bricks that fell in the A-bomb blast.

Soundness surveys have generally been conducted every three years since the preservation project undertaken in 1989. Cracks in the walls, and decay in the steel, as well as the sinking and tilting of the structure, are surveyed. The experts in charge then make decisions on whether or not repair work is required.

Earthquake resistance surveys have been carried out since fiscal 2008. This year computer simulation will be used to analyze the data on the condition of the structure and the ground, along with other aspects of the dome, that was gathered in the previous inspection. The objective is to determine whether the dome can withstand an earthquake registering an intensity of 6 on the Japanese seismologic scale, and to pinpoint the structure’s weak points with regard to earthquakes.

Between late January and mid-March, the A-bomb Dome will be shrouded in mesh sheets to safeguard against falling articles. An official of the Park Development Division of the City of Hiroshima said, “We apologize to visitors who have come to Hiroshima from places far away. But we ask for their understanding, as the survey is essential to help preserve the A-bomb Dome for future generations.”