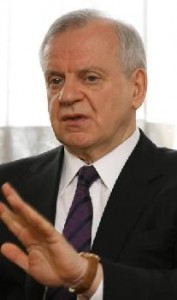 On December 19, Mihail Beli, the Russian Ambassador to Japan, paid a visit to Hiroshima Mayor Kazumi Matsui at Hiroshima City Hall to discuss the abolition of nuclear weapons and other issues.

The mayor asked Mr. Beli to “convey our passionate wish for the abolition of nuclear weapons to the people of your country,” and called on the ambassador to support the City of Hiroshima in its desire to bring the next Nuclear Non-proliferation Treaty (NPT) Review Conference, slated for 2015, to Hiroshima. Mr. Beli voiced his approval, saying, “If the idea is realized, it would serve as a symbolic appeal to the world.”

The ambassador visited the Hiroshima Prefectural Government Office, too, to meet with Hiroshima Governor Hidehiko Yuzaki.

Before these discussions with Hiroshima leaders, Mr. Beli visited the headquarters of the Chugoku Shimbun in downtown Hiroshima. Yoshinori Okatani, the managing director of the newspaper company, welcomed the ambassador and shared the company’s efforts with regard to nuclear abolition. “As a newspaper company in Hiroshima, we have a fundamental mission to continue appealing ‘No More Hiroshimas’ to the world,” he said.

Mr. Beli made a point of saying that the A-bombed city of Hiroshima has served as an inspiration for building a nuclear-free world. “If the nations of the world would work together,” he said, “this goal could be achieved.” The ambassador added that he was deeply moved by his attendance at the Peace Memorial Ceremony held on August 6, the anniversary of the atomic bombing. “Encouraging politicians and diplomats to attend this ceremony is vital to sound an alarm to the world,” he said.