Cenotaph in Hiroshima Peace Memorial Park is defaced with paint 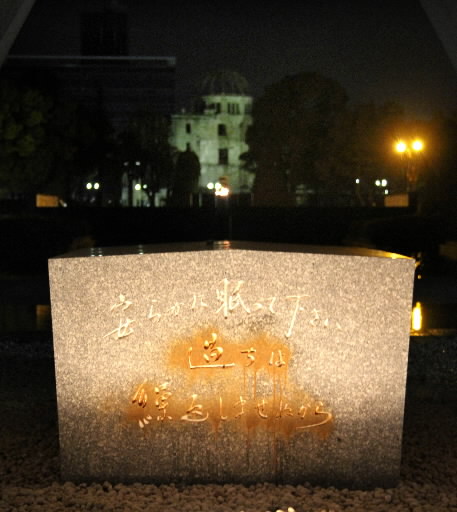 At around 12:50 in the early morning of January 4, a guard in Hiroshima Peace Memorial Park discovered that the inscription on the Cenotaph for the A-bomb Victims had been vandalized with gold spray paint. He then reported this finding to the Hiroshima Chuo Police Station. The City of Hiroshima submitted a damage report to the police, who have begun an investigation of the incident.

The stone plate bearing the inscription is about 80 centimeters high, about 125 centimeters wide, and about 13 centimeters deep. The words [in Japanese] “Let all the souls here rest in peace; for we shall not repeat the evil,” is etched horizontally in three lines. According to the Hiroshima Chuo Police Station and other authorities, the second and third lines stating “for we shall not repeat the evil” were defaced with spray paint.

Police also said that the park’s alarm system was activated when someone entered the area surrounding the cenotaph. This prompted the guard to hurry to the site.

The guard reportedly found no such disturbance when he patrolled the area at around 11 p.m. on January 3. Police plan to study the images on the city’s security cameras and will endeavor to identify the perpetrator.

According to the Hiroshima Peace Culture Foundation, which manages the cenotaph, and other sources, security cameras filmed a man wearing a black-colored jacket and white-colored pants leaving the scene. One person apparently witnessed a man with gray hair, in his 50s, fleeing the area.

At 5 a.m., two employees of the Hiroshima Peace Culture Foundation began to take emergency steps to remove the paint by applying paint thinner and other chemicals. The complete process of restoring the monument will continue after January 5.

This is the fifth reported incident of vandalism of the cenotaph since 1965. In one of the more recent incidents, which occurred in March 20o2, reddish-brown paint was splashed on the memorial. Another incident took place in July 2005, when a politically-motivated attack damaged part of the cenotaph.

Commenting on the new case of vandalism, Hiroshima Mayor Kazumi Matsui stated: “No matter the intent, such acts are unforgivable. When I think of the spirit of Hiroshima and the thoughts of the people seeking peace in the world, I can only say that this act is an utter blasphemy against the souls of the A-bomb victims and, as mayor of Hiroshima, I feel a sense of deep indignation. Though some may argue with the wording of the inscription, this reason is no cause for forgiveness.

The Cenotaph for the A-bomb Victims
The cenotaph was unveiled on August 6, 1952 by the City of Hiroshima. The inscription “Let all the souls here rest in peace; for we shall not repeat the evil” is etched on the front of a stone chest, which houses the volumes of a register holding the names of the dead. The wording was conceived by the late Tadayoshi Saika, a professor at Hiroshima University, with the final decision made by the late Shinso Hamai, mayor of Hiroshima. Although controversy over the subject “we” has erupted in the past, the City of Hiroshima interprets “we” to mean “all of humanity.”