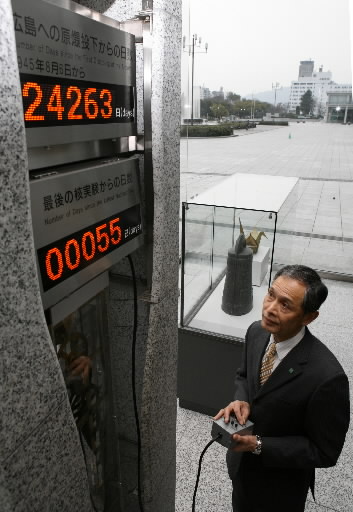 Following a new type of nuclear test, the fourth of its kind, conducted by the United States on November 16, 2011, Hiroshima Peace Memorial Museum moved to reset the “Peace Watch Tower” on January 10. This clock, which stands in the lobby of the museum’s east wing, displays the number of days since the world’s last nuclear test. The number on the clock was reset from 285 to 55.

The clock was reset for the first time since May 24, 2011, when it was learned that the U.S. had conducted a nuclear test of the same type. This is the 15th time the clock has been reset since it was installed in August 2001.

Koichiro Maeda, director of the museum, changed the number to 55. He commented: “I believe the test reflects the will of the United States to maintain its nuclear arsenal, and I find that very disappointing.”

Responding to an inquiry by the Hiroshima municipal government, the National Nuclear Security Administration (NNSA), which is under the jurisdiction of the U.S. Department of Energy, has disclosed that the November test was the fourth, and that the third such test was conducted on September 22, 2011.

On January 10, Hiroshima Mayor Kazumi Matsui and Governor Hidehiko Yuzaki, among others, sent letters of protest to U.S. President Barack Obama via the U.S. Embassy in Tokyo. The letter says that conducting the fourth nuclear test of this kind is “completely unacceptable.”

This was the 599th letter of protest sent by mayors of Hiroshima to protest nuclear tests carried out not only by the United States but by other countries as well.