International conference for a nuclear power-free world held in Yokohama 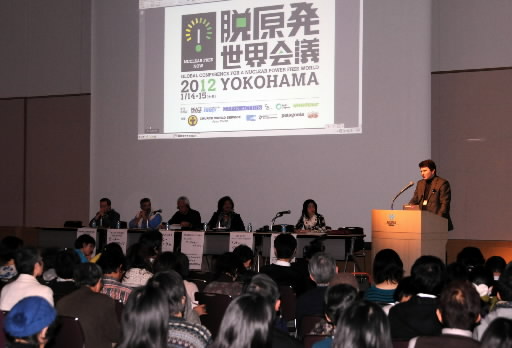 On January 14, an international conference, titled the “Global Conference for a Nuclear Power-Free World,” opened in the city of Yokohama. The event’s executive committee, composed of six nongovernmental organizations (NGOs), has organized the first conference on nuclear energy since the accident at the Fukushima No. 1 (Daiichi) nuclear power plant last March. Approximately 5,000 people, including 100 experts and activists from about 30 of the world’s countries and regions, as well as ordinary citizens, are taking part. A-bomb survivors and others appealed for the elimination of nuclear energy and spoke of the horror of nuclear power’s potential to inflict damaging radiation on the public.

At the opening session, Tatsuya Yoshioka, director of Peace Boat and the head of the executive committee, addressed the participants, saying, “Let us create a great groundswell so no more hibakusha [radiation sufferers] will be produced anywhere in the world.” Shuntaro Hida, a former army doctor who was exposed to the atomic bombing in Hiroshima, pointed out the dangers of internal exposure to radiation and stressed, “Human beings are unable to control radiation. We must create a safe world free of nuclear power and nuclear weapons.”

In one of the four theme-based sub-conferences titled “Learning from Hibakusha Around the World,” the participants, including sufferers of nuclear weapons tests and representatives from anti-nuclear organization, reported on their experiences. Peter Watts, co-chair of an Australian NGO, urged, “We must put an immediate stop to the mining of uranium, which is used to generate nuclear power and produce nuclear weapons.”

About 30 related events organized by NGOs and other groups were also held at the venue. At a session to hear the accounts of A-bomb sufferers, about 50 people attended. Toshiko Tanaka, 73, a resident of Higashi Ward, Hiroshima, was one A-bomb survivor who shared her experience. Ms. Tanaka, who continues to feel anxious over the possible effects of radiation on the health of her children, said, “Radiation deprives us of our freedom as human beings and imposes sorrow on our lives.”

On January 15, the final day of the conference, the participants will discuss such issues as the relationship between the export of nuclear energy technology and nuclear proliferation, and deliver the “Yokohama Declaration for a Nuclear Power-Free World.”