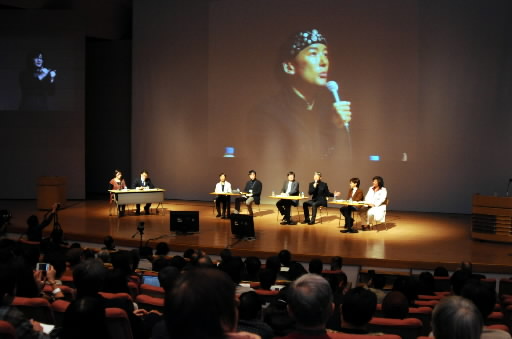 On January 15, the final day of the “World Conference for a Nuclear Power-Free World,” held in the city of Yokohama, the participants engaged in discussions on a wide range of themes, including the relationship between nuclear power and nuclear weapons development. The conference closed after issuing the “Yokohama Declaration for a Nuclear Power-Free World,” which calls for phasing out the nuclear fuel cycle, including the decommissioning of nuclear power plants. Roughly 11,500 people took part in the two-day gathering.

A series of nine theme-based sub-conferences was a feature of the event. In the session entitled “Towards a World without Nuclear Power or Nuclear Weapons,” eight people from seven nations shared the platform. Praful Bidwai, an Indian journalist following nuclear issues, stressed the fact that nuclear energy technology can be used for the development of nuclear weapons. He expressed his opposition to the agreement signed between India and Japan involving nuclear energy, and called on the participants to take action, saying, “The infrastructure of nuclear energy itself is a danger. We must make efforts to eliminate nuclear power and nuclear weapons.”

Kamal Gammoh, a lawmaker from Jordan, whose government concluded a nuclear energy agreement with Japan, also expressed opposition to nuclear power, stating, “Even Japan, an advanced nation when it comes to nuclear technology, has been unable to contain the accident in Fukushima.”

One sub-conference involved the heads of six municipalities located near nuclear power plants or in areas around Tokyo. At this session, Katsutaka Idogawa, the mayor of the town of Futaba in Fukushima Prefecture, where the Fukushima No. 1 (Daiichi) nuclear power plant is located, expressed his dissatisfaction with the response of the central government toward the exposure to radiation suffered by local residents.

At the closing session, the conference issued a declaration drafted by the executive committee, comprised of six nongovernmental organizations (NGOs).

The declaration includes eight areas of action and calls for concrete efforts from the public. These areas of action include: crafting an international road map for the phasing out of the nuclear fuel cycle and the decommissioning of all nuclear power plants; demonstrating opposition to the restarting of nuclear plants that are currently shut down; and pursuing a prohibition on the export of nuclear power plants and components to developing nations.