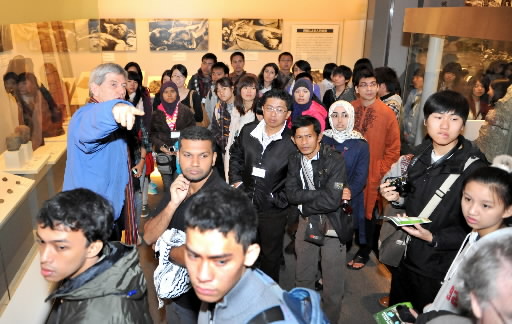 The Youth Peace Ambassador Workshop opened on March 24 at Hiroshima Peace Memorial Museum in downtown Hiroshima. The participants of this workshop, mainly high school and university students from home and abroad, are developing ideas to help build a more peaceful world. After engaging in sessions at the museum, they moved to the National Etajima Youth Friendship Center, located on the island of Etajima, just south of the city. There they will continue their discussions until March 30 and draw up action plans to address challenges facing the world.

The event is the first such workshop jointly organized by the United Nations Educational, Scientific and Cultural Organization (UNESCO) Bangkok Office, the United Nations Institute for Training and Research (UNITAR) Hiroshima Office, and the Hiroshima Peace Culture Foundation (HPCF). Participating in the gathering are a total of 101 students from 15 overseas countries and regions, including Iran, Bangladesh, Uzbekistan, and Taiwan. Students from Hiroshima and Okayama Prefectures in Japan are also taking part.

On the first day, the participants were guided through Peace Memorial Museum by Steven Leeper, the chairman of the HPCF. Afterwards they listened to Keijiro Matsushima, 83, a resident of Saeki Ward, relate his experience of the atomic bombing. Mr. Matsushima was 16 years old when he was exposed to the atomic bomb at a location roughly two kilometers from the hypocenter. The participants also listened to a report by the nuclear power ethics committee of the UNESCO Bangkok Office. This report conveyed information on the possible spread of radioactive materials as a result of the disposal of rubble from the disaster zone of the Great East Japan Earthquake over a wide area.

Egito Hapsari, 20, a junior in college from Indonesia, said that she now realized the horror wrought by the atomic bomb and the importance of abolishing nuclear weapons. Expressing her enthusiasm for the week-long gathering, she said the event is offering her a more global perspective and she intends to make efforts at peace building after returning to Indonesia.

In a talk he gave on March 25, Mr. Leeper said that the likelihood of nuclear arms being used will grow if the number of nuclear weapon states increases in the future. He also outlined preventive measures intended to address this situation.

The participants moved to Etajima on the afternoon of the same day, where they heard Henry Jiang, 18, speak about his experiences as a UNESCO Youth Peace Ambassador. Mr. Jiang, a resident of Saeki Ward, is a third-year student at AICJ Junior & Senior High School in Asaminami Ward and served as an organizer for the workshop.