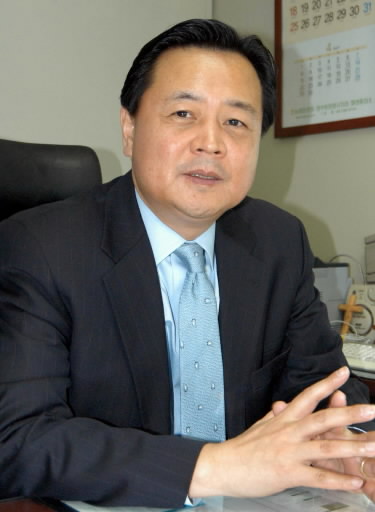 At the second Nuclear Security Summit, which was held in Seoul on March 26 and 27, the leaders of one country after another issued statements calling on North Korea to refrain from the launch of a satellite believed to be a long-range ballistic missile. Cho Hyun-Dong is the director general for North Korean Nuclear Affairs in South Korea’s Ministry of Foreign Affairs and Trade. The Chugoku Shimbun asked him about North Korea’s intentions and the response of the South Korean government as well as the role Japan should play with regard to the denuclearization of the Korean peninsula. The following are excerpts from that interview.

What is the real meaning behind North Korea’s announcement of the launch?
Ostensibly it is to commemorate the 100th anniversary of the birth of Kim Il Sung. They want to put on a show of the new administration’s might for the people of North Korea.

How do you assess the military capability of North Korea?
It is world-class. Their army is about 1 million strong, and they reportedly have enough plutonium to manufacture several nuclear weapons. Scientists who have been there have stated that North Korea has secret facilities where plutonium is being enriched.

Will North Korea listen to the calls for it to exercise restraint made by world leaders at the summit?
South Korea, Japan, the United States, Russia and even China announced their opposition to the launch, but North Korea shows no signs of listening. All we can do is continue diplomatic efforts.

Going ahead with the launch will lead to unfortunate consequences for North Korea. The United Nations Security Council will probably move to impose additional sanctions, and the U.S. will withdraw the offer of food supplies that was included in the agreement reached between the U.S. and North Korea in February. South Korea will also respond to any provocative behavior with sanctions. But if North Korea sits down at the negotiating table, we are prepared.

What role should Japan play?
A close relationship between South Korea, Japan and the U.S. is the key to the future of the six-party talks. I would like to continue to conduct dialogues on a routine basis and collaborate with the Japanese government at various levels. Japan is the only country to have experienced atomic bombings. Calls by its citizens and non-governmental organizations for denuclearization also carry a lot of weight. I would like Japan to continue to send out this message.