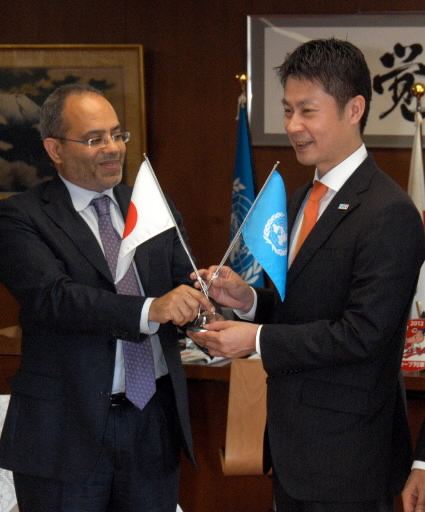 On March 29, Dr. Carlos Lopes, executive director of the United Nations Institute for Training and Research (UNITAR, headquartered in Geneva, Switzerland), visited the Hiroshima Prefectural Government Office to meet with Hiroshima Governor Hidehiko Yuzaki. Dr. Lopes conveyed the willingness of his organization to cooperate in concrete ways with the prefecture’s “Hiroshima for Global Peace” plan, which the prefecture finalized in November 2011.

Mr. Yuzaki shared the plan with Dr. Lopes, explaining that the main pillar of the plan is the idea of nurturing human resources in the field of peace building. Dr. Lopes thanked the governor for the support he has demonstrated toward UNITAR and called for “continued collaboration to promote the development of human resources.”

After the meeting, the UNITAR chief held a press conference and offered his assessment of the prefecture’s plan, saying, “Hiroshima is well-known as an A-bombed location and is viewed as a symbol of reconstruction. As a symbol of peace building, too, this place has the potential to attract many visitors.”

The global peace plan also incorporates the idea of holding international conferences in Hiroshima where senior government officials gather to engage in multilateral negotiations on nuclear disarmament. Dr. Lopes said that he would be eager to cooperate with this idea.

Dr. Lopes also met with Hiroshima Mayor Kazumi Matsui at Hiroshima City Hall. Mr. Matsui asked Dr. Lopes for his support in the city’s effort to host the Nuclear Non-proliferation Treaty (NPT) Review Conference in Hiroshima in 2015. Dr. Lopes responded by saying: “There would be significance in holding the conference in the A-bombed city of Hiroshima. I don’t think this is impossible.”