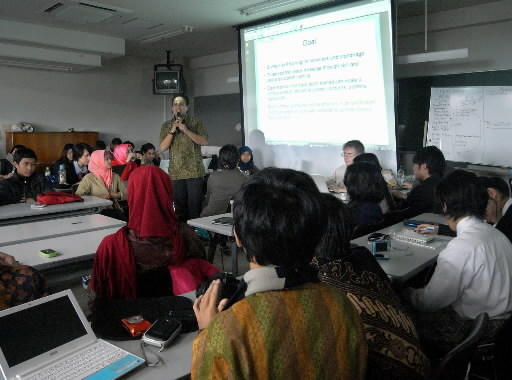 The Youth Peace Ambassador Workshop closed on March 30 at the National Etajima Youth Friendship Center, located in the city of Etajima. The event brought together high school and university students from home and abroad to engage in discussions on making a more peaceful world, and the participants developed 38 concrete action plans and took turns presenting these ideas.

A total of 105 participants from 16 countries and regions, including Japan, spent three days drawing up the action plans, individually or in groups, then projected their plans on a screen as they gave their presentations. The plans include such ideas as creating a peace education program geared for high school students and organizing a peace conference. The students’ plans are based on the situations found in their local communities and incorporate costs, benefits, and timelines.

Putting forward a plan to hold a peace concert in Bangkok, Fatima Khan, 16, a second-year high school student from Thailand, said with strong enthusiasm, “I grew personally as I worked on the detailed plan for the concert. I intend to take action as soon as I get home.”

The workshop, which opened on March 24, was organized by the United Nations Educational, Scientific and Cultural Organization (UNESCO) Bangkok Office, the United Nations Institute for Training and Research (UNITAR) Hiroshima Office, and the Hiroshima Peace Culture Foundation (HPCF). The participants visited Hiroshima Peace Memorial Museum in the heart of the city and listened to the account of an A-bomb survivor as well as lectures on diplomacy and peace building by staff members of UNESCO and UNITAR.

Examples of action plans include:
Creating a peace education program which draws on the genocide by the Pol Pot regime and the atomic bombing of Hiroshima (Cambodia)

Producing a book on peace with photos and pictures for distribution to schools (Japan, Canada)

Holding a peace festival for youth in Yogyakarta (Indonesia)

Inspiring children orphaned by the earthquake of September 1999, and other incidents, to have courage and hope (Taiwan)

Holding a peace concert and producing a film (Thailand)