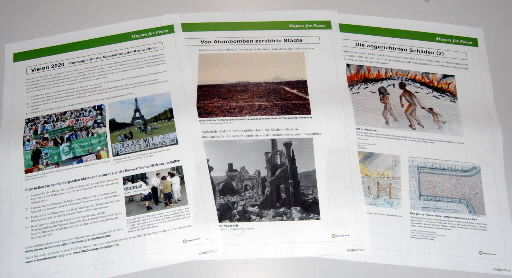 Mayors for Peace, an international organization seeking the abolition of nuclear weapons by the year 2020, will hold a poster exhibition on the atomic bombings in Vienna, Austria, in conjunction with the first preparatory meeting for the Nuclear Non-proliferation Treaty (NPT) Review Conference, scheduled for the period of April 30 to May 11. The organization will make an appeal for the elimination of nuclear arms to the participants of the meeting, gathering from a range of nations.

A total of 18 posters, making use of two languages, English and German, will be put on display. The posters include photographs of Hiroshima and Nagasaki in the aftermath of the bombings, drawings made by A-bomb survivors to convey the horror of the atomic bombs, and information on the reconstruction of the two cities and the work of Mayors for Peace, among other material.

The organization plans to hold the exhibition at the Vienna City Hall and the Vienna International Center Building, which is the venue for the preparatory meeting. Hiroshima Mayor Kazumi Matsui, who serves as the president of Mayors for Peace, is expected to take part in the opening ceremony.