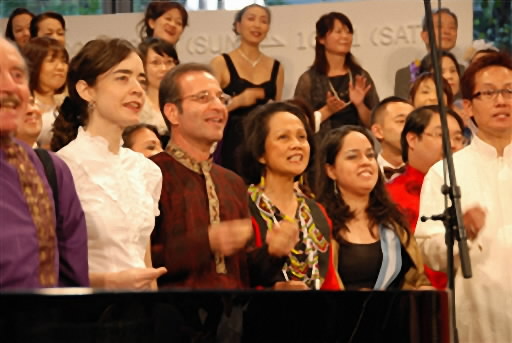 The United Nations Singers, a chorus composed of staff members from United Nations Headquarters in New York, will hold a concert in Hiroshima for the first time on May 20. Singer Tokiko Kato and other professional musicians will perform with the group. After Hiroshima, the chorus will stage concerts in Nagasaki and Okinawa, offering prayers for the souls of war victims through its music.

The concert in Hiroshima will be held at the Hiroshima City Bunka Koryu Kaikan in the city center starting at 5:00 p.m. on May 20. Thirty-five members of the chorus, composed of men and women from 25 nations and regions, will perform about ten songs, including “Amazing Grace” and folk songs from around the world, while wearing national costumes of their choosing.

Four professional singers, including Ms. Kato, as well as players of the koto, a traditional zither-like Japanese instrument, will take part as guest musicians. Also participating will be a chorus group from the Hiroshima Choral Association, directed by Chizuko Tani.

The United Nations Singers will celebrate the 65th anniversary of its establishment this year. To help mark this anniversary, the group decided to hold concerts in the two A-bombed cities and Okinawa, the only location in Japan that experienced a ground battle in World War II.

A committee working to provide support for the concert in Hiroshima is chaired by Yasuo Harada and consists of cultural institutions and other organizations in the city. The committee plans to hold an exchange event with local children at the Gion Nishi community center in Asaminami Ward on May 19, the day before the concert.