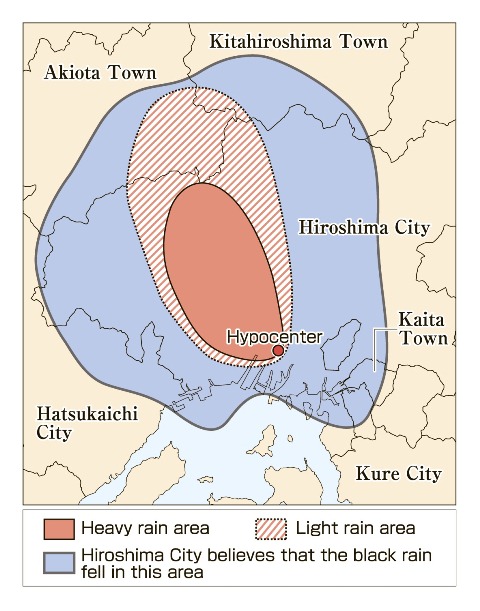 Discussions designed to review the area of the “black rain” that fell in the wake of the atomic bombing of Hiroshima have reached their final stage. The designated area of the black rainfall, called the “First Class Health Examination Special Designated Area,” enables those residents of the area at that time to take advantage of relief measures provided by the Japanese government. While the City of Hiroshima contends that the effects are both physical and mental for those who were exposed to the black rain, and demands that the central government expand the designated area to a size six times larger than its current scope, the working group of an investigative commission established by the Ministry of Health, Labor and Welfare has only acknowledged the effects of black rain on mental health. The Chugoku Shimbun now examines the positions held by the two sides, prior to the commission’s report, which is expected next month.

Currently, only the “heavy rain area” is covered in the designated area, and the “light rain area” remains beyond the bounds of this designation. The committee and its working group, which has been conducting a “scientific verification” of the investigation carried out by the City of Hiroshima, cite two points of contention: 1) The health conditions of the people exposed to the black rain that fell outside of the designated area; and 2) The scope of the rainfall.

With regard to health effects, the city’s large-scale survey of such residents posed questions involving health issues, with an emphasis on mental health. Responses were then analyzed. Based on the history of illness reported by the respondents, the City of Hiroshima maintains that the people who were exposed to the black rain which fell outside of the designated area are “suffering from poor health, both mental and physical, that is equal to that of the A-bomb survivors.”

The working group, on the other hand, performed its own analysis of the city’s data, which focuses on mental health issues. Saying that “the data makes it difficult to assess physical illness,” the working group has reserved judgment on the physical effects of the black rain. It confirmed, though, that the people who were exposed to the rain outside of the designated area have more mental health concerns compared to those not exposed to the rain, pointing to their “fears and worries that their health has been affected by radiation.”

Based on a report released in 1980 by the “Informal Gathering to Discuss Fundamental Problems of the Atomic Bomb Survivors,” the Japanese government maintains that “expanding the designated area requires a scientific and rational basis which confirms the effects to health caused by radiation,” but it has not determined the specific criteria for making such a judgment. In the case of the Nagasaki A-bombing, the government has acknowledged the health effects of the black rain and fixed the “Second Class Health Examination Special Designated Area,” the residents of which are entitled to subsidized medical care for their illnesses, but the government makes a distinction between these people and A-bomb survivors.

Reacting to the government’s stance, Kenji Kamiya, the director of Hiroshima University’s Research Institute for Radiation Biology and Medicine (RIRBM), who spearheaded the investigation conducted by the City of Hiroshima, said: “The government must acknowledge the wider range of effects to mental health wrought by A-bomb radiation. It’s easy to imagine, as well, that physical health is affected over the long term.”

As for the scope of the rainfall, the city estimates that the rain fell over a wider area than the current “light rain area” suggests, basing this conclusion on the locations of people who say they were exposed to this rainfall. The working group, though, has stated that inadequate data makes determining the scope of the rainfall “difficult.” At the same time, it acknowledges that there are nine areas located outside of the designated area which have higher rates of exposure than previously thought. In earlier discussions, some have argued that the commission should attach greater importance to the areas beyond the “light rain area” that suffered possible exposure to the black rain.

Yasuhito Sasaki, the chair of the commission, has stated clearly: “We will present a report which is in keeping with the results that have been verified by the working group.” The central government will then make a final decision on whether the designated area will be expanded.

At a meeting held on March 29, a participant from the Hiroshima city government said that it is difficult to confirm the facts of the black rain scientifically based on the connections involving the rain and radioactive materials and illnesses of those who were exposed. The person stressed that the city has no choice but to clarify the effects by relying on the testimonies of the residents. Masayuki Matsumoto, 87, a resident of the town of Akiota, Hiroshima Prefecture and vice secretary general of the Hiroshima Prefectural Association of the Black Rain Atomic Bombing Sufferers, said forcefully: “Because the black rain fell outside of the designated area, we demand access to appropriate relief measures.” He now keeps a close lookout for the decision by the central government.

The Japanese government’s review of the designated “black rain” area
The Japanese government has designated the “heavy rain area” as the “First Class Health Examination Special Designated Area” and performs health examinations of these residents. If a resident develops certain illnesses, the A-bomb Survivor’s Certificate is then issued. The City of Hiroshima, along with Hiroshima Prefecture and a team of researchers, established a research committee and carried out a survey in 2008 seeking information from Hiroshima residents and residents of municipalities around the city. About 27,000 responses were obtained. Based on its findings, the City of Hiroshima demanded, in 2010, that the central government expand the designated area. The review commission, established by the Ministry of Health, Labor and Welfare, is comprised of experts in such fields as radiation and psychology. It convened seven meetings from December 2010 to March 2012.