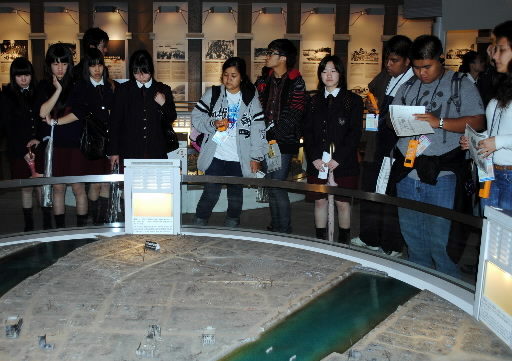 On April 20, five students from Tinian Junior Senior High School on the island of Tinian, a dominion of the United States, paid a visit to Hiroshima Peace Memorial Museum and learned about the devastation caused to the city by the atomic bombing. The bomb dropped on Hiroshima was delivered by the B-29 bomber dubbed “Enola Gay,” which had taken off from Tinian.

Students of Koryo High School, located in Asaminami Ward, Hiroshima, which maintains an exchange program with the high school, served as guides for the visiting students. The students from Tinian Junior Senior High School gazed at a panoramic model which depicts the destruction of the city center in the aftermath of the bombing, as well as artifacts of the A-bomb victims, with sorrowful looks.

Samantha Wedding, 16, a second-year student at the high school, said, “It’s make me very sad that innocent people suffered a tragedy like this. I plan to tell the people of Tinian what I’ve learned here.”

The group arrived in Japan on April 19 and are scheduled to stay until April 22. The sister school agreement between Tinian Junior Senior High School and Koryo High School was made in 2005. Each August, students from Koryo High School also attend a memorial ceremony on Tinian where the Tinian people console the souls of the war dead.