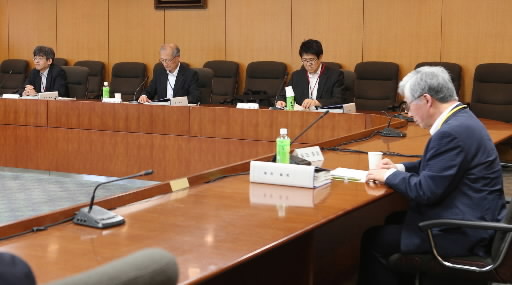 On May 29, the investigative committee established by the Ministry of Health, Labor and Welfare essentially approved a draft report that takes an unfavorable view toward expanding the “designated black rain area” to a size roughly six times larger than its current scope. Supporters of expanding the designated area include the City of Hiroshima, which has called on the Japanese government to effect this change. Residents of the designated area at the time of the atomic bombing are able to take advantage of relief measures provided by the central government. The committee concluded that “no basis has been found for adverse effects to health on the residents of the requested area as a result of the radiation emitted by the atomic bomb.” At the same time, the committee has acknowledged that those exposed to the black rain hold concerns over their health and have proposed that the central government and local governments implement programs where such people can take part in consultations.

The committee’s final report will be officially released at its next meeting, to be held in early July, after modifications in wording are made to the draft report. With this final report in hand, the ministry will then come to a decision regarding its policy in connection with the request to expand the designated black rain area.

The draft report presented at the committee’s eighth meeting, held at the ministry, was in keeping with the findings of its working group, which had reanalyzed the data from a survey conducted by the City of Hiroshima and other entities which probed the health conditions of those who had experienced the atomic bombing. The draft report acknowledges that people who were exposed to the black rain tend to have a greater degree of mental distress than those who suffered no exposure, pointing out that the basis for this distress can be interpreted as stemming from their fears over the effects of radiation. The report states, however: “Due to the nature of the survey design, it is difficult to assess physical illnesses.”

The report makes no conclusion regarding the scope of the rainfall, citing such reasons as 1) A limited number of locations in the non-designated area have a heightened incidence of people who were exposed to the black rain, 2) There is limited data available on locations lying 20 kilometers or more from the hypocenter, and 3) This data is based on memories of more than 60 years ago, and as such, the accuracy of these memories have not been sufficiently addressed.

In acknowledging the concerns of those exposed to the black rain, the report states that it would be “useful to pursue such measures as consultations” in order to ease their fears. It contends, as well, that previous investigations, including the latest survey carried out by the City of Hiroshima, have produced no clear evidence of adverse health effects as a result of radioactive fallout from the atomic bombing. The report thus takes the position that conducting further surveys would be largely inconsequential.

Yasuhito Sasaki, the chair of the committe and the executive director of the Japan Radioisotope Association, told reporters after the meeting: “It was difficult to immediately connect the survey results submitted by the City of Hiroshima with its request for an expansion of the designated area.”

In 2008, the City of Hiroshima and other entities conducted a survey which yielded roughly 27,000 respondents, including A-bomb survivors and those who experienced the black rain which fell in the aftermath of the bombing. The responses were then scientifically analyzed. The city maintains that the people who were exposed to the black rain which fell outside of the designated area are “suffering from poor health, both mentally and physically, that is comparable to the condition of A-bomb survivors.” It also contends that the rainfall covered nearly all areas of the city, as well as affecting some neighboring municipalities. Based on its findings, in July 2010 the City of Hiroshima, along with Hiroshima Prefecture and relevant municipalities, called on the central government to expand the designated black rain area to a size about six times larger than the current scope. In December 2010, the Ministry of Health, Labor and Welfare established an investigative committee to scientifically evaluate the survey report submitted by the City of Hiroshima.