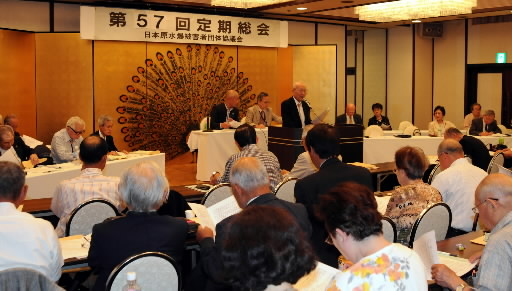 On June 5, the regular general meeting of the Japan Confederation of A- and H-bomb Sufferers Organizations (Nihon Hidankyo) opened at a hotel in downtown Tokyo. Responding to the disaster at the Fukushima No. 1 (Daiichi) nuclear power plant, the secretariat of the organization reported on the group’s activities for fiscal 2011, in which the group sought to strengthen its efforts to realize a “nuclear power-free society.”

Approximately 110 people, including prefectural representatives of the confederation from various parts of Japan, attended the meeting. Sumiteru Taniguchi, co-chair of the organization, mentioned the Fukushima accident in his address, stating, “We must end the operation of nuclear power plants to ensure that no one else will suffer exposure to radiation.”

Terumi Tanaka, secretary general of the organization, also touched on the nuclear disaster in his keynote report. The confederation, he said, was seeking to build a nation that “does not rely on nuclear energy in its industry, economy, culture, and livelihoods.” The report presented by the secretariat, on the group’s activities for fiscal 2011, included a call for the Japanese government and electric power companies to phase out the use of nuclear power plants and to refrain from restarting operations at power stations that are currently idle.

On June 6, the last day of the gathering, the participants will discuss the subject matter of the two reports. They will also discuss the organization’s policies for its major campaign of fiscal 2012, which includes appealing to second- and third-generation A-bomb survivors to join the organization and seeking revisions to the Atomic Bomb Survivors’ Relief Law, such as establishing a new “A-bomb Survivors Allowance” which would replace the current certification system for A-bomb diseases. In addition, the organization will urge the central government to shelve its plans to resume operations of the No. 3 and No. 4 reactors at the Oi nuclear power plant, run by the Kansai Electric Power Company.