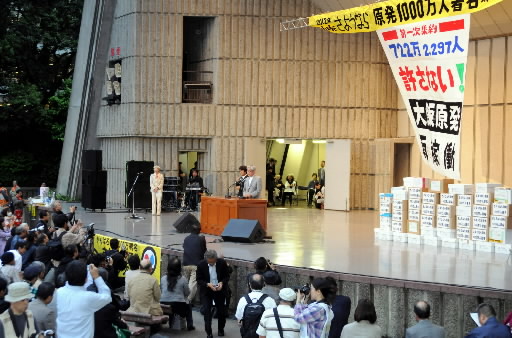 On June 6, a rally for a petition drive organized by the campaign “Farewell Nuclear Power Plants” was held in Hibiya Park, Tokyo. Behind the petition drive initiative are a number of well-known intellectuals, including Nobel Prize-winning writer Kenzaburo Oe. Reportedly, 7,222,297 signatures had been collected by June 5. The organizers will present the signatures to the Japanese government and Diet around June 12 to press for an end to the use of nuclear energy in Japan, including plans to decommission the nuclear reactors found at the nation’s nuclear power stations.

The petition seeks the implementation of such measures as canceling any new construction of nuclear power plants, eliminating fast breeder reactors and reprocessing plants for spent nuclear fuel, and shifting the nation’s energy policy to emphasize sources of natural energy. The petition drive, dubbed the “Citizens’ Initiative for 10 Million Signatures,” was launched in June 2011 by Mr. Oe and eight other cultural figures.

According to the rally organizers, about 2,300 people joined the event. In his address to the participants, Mr. Oe stressed that, in the wake of the accident at the Fukushima No. 1 (Daiichi) nuclear power plant, a new morality was created which views nuclear energy as “fundamentally wrong.” “Based on this sense of morality,” he said, “the petition drive has intrinsic power.”

Satoshi Kamata, a writer and another founder of this effort, argued: “We must end operations at nuclear power plants before another accident occurs.” In an appeal, the participants of the rally expressed their opposition to restarting the No. 3 and No. 4 reactors at the Oi nuclear power plant, run by the Kansai Electric Power Company.

Mr. Oe and his colleagues plan to hold a rally in downtown Tokyo on July 16 with 100,000 participants. They continue to call for 10 million signatures from the public, the original goal of the campaign.