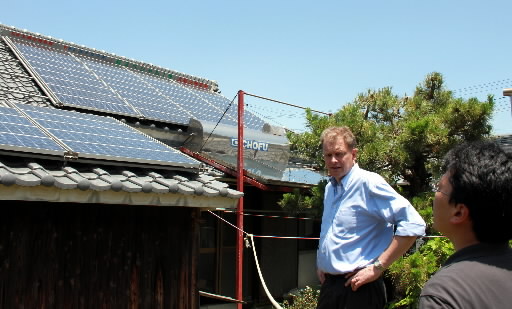 On June 9, Tomas Koberger, 51, executive board chair of the Japan Renewable Energy Foundation, visited the town of Kaminoseki, Yamaguchi Prefecture, where the Chugoku Electric Power Company seeks to construct a nuclear power plant. The foundation has been calling for a shift from the use of nuclear energy to natural sources of energy. Mr. Koberger observed the efforts being made on Iwaishima Island, including a supply of electricity generated by photovoltaic panels.

Mr. Koberger, who was formerly the director general of the Swedish Energy Agency, examined solar panels on the roofs of private homes on the island and the agricultural industry there. Touching on the renewable energy feed-in tariff to be launched in July, Mr. Koberger said, “The use of natural energy sources to generate power can become a profitable business opportunity for local communities. I expect this realization will grow and I hope Iwaishima will serve as a successful model for others.”

“Iwaishima Sennen-no-Shimazukuri Kikin” (“Foundation for Iwaishima Island Development for 1,000 Years”) is an entity that was launched by local residents opposed to the construction of a nuclear power plant near the island. It has the aim of achieving an electricity supply which relies completely on the use of local sources of natural energy. Takashi Yamato, 35, the director of the foundation, who guided Mr. Koberger, said, “We reaffirmed that the photovoltaic panels are a viable option for helping local communities to survive economically.”