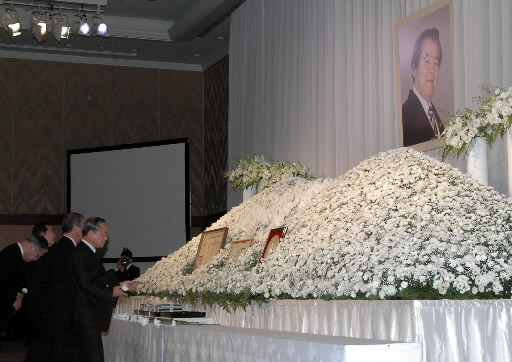 On June 9, a memorial gathering for Dr. Shizuteru Usui, who died on May 9 at the age of 74, was held at a hotel in downtown Hiroshima. Dr. Usui had served as the president of the Hiroshima Prefectural Medical Association and the Japan Chapter of the International Physicians for the Prevention of Nuclear War (IPPNW). Approximately 1,200 people from the medical and administrative fields, including Yoshitake Yokokura, president of the Japan Medical Association, attended the gathering. Those present honored the memory of Dr. Usui, noting his warm nature and achievements in providing support to A-bomb survivors.

The gathering was co-hosted by the Hiroshima Prefectural Medical Association and the Hiroshima City Medical Association. Toshimasa Asahara, president of Hiroshima University, offered his condolences, saying, “Dr. Usui made significant contributions to medical care in the area and was dedicated to helping bring about a world free of nuclear weapons. We have lost an invaluable citizen of Hiroshima.” The attendees offered flowers and pledged to carry on Dr. Usui’s efforts, including a vow to make the upcoming IPPNW World Congress a success. The IPPNW event will take place in the city of Hiroshima this August.

Dr. Usui took office as the president of the Hiroshima Prefecture Medical Association in 2004 and had begun his fifth term in April.

Following is the message from Dr. Bernard Lown, co-founder of IPPNW, to the memory of Dr. Shizuteru Usui:

Only last September Dr. Usui, including his wife and a small delegation of Japanese peace activists visited my home. I was impressed by his vibrant spirit and deep commitment to achieving a nuclear free world. Of course I had known Dr. Usui from his participation in numerous IPPNW Congresses and his committed leadership of JPPNW. He was an articulate spokesman for nuclear abolition, which cause he infused with passion and intellectual vigor. As an A-bomb survivor he brought persuasive, powerful personal testimony on the evils of nuclearsim.

It is sad that he will not be present at the upcoming IPPNW Congress in Hiroshima that he worked so hard to help organize. Though I am certain that his spirit will infuse and mold the Congress and take us a step forward to ridding the world of genocidal weapons.

His passing I deem a deep personal loss,