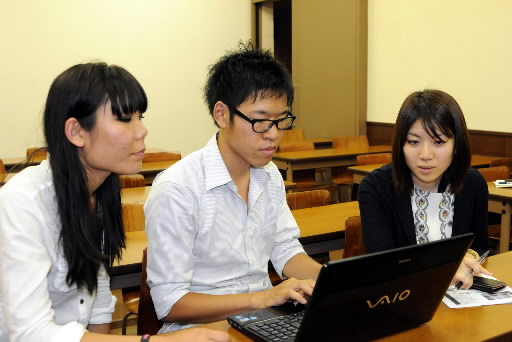 A network of youth, called “BANg-NEA,” comprised of young people from Japan and South Korea, has been launched with the aim of realizing a “nuclear-free Northeast Asia.” Communicating via email, the members of the network will share information and organize activities to promote the abolition of nuclear weapons and the elimination of nuclear energy.

“BANg” is an acronym which stands for “Ban All Nukes Generation.” With its roots in Europe, the network has been expanding its efforts, including presentations delivered at international conferences and on other occasions. BANg-NEA becomes the Northeast Asian branch of the network.

On June 2, three founding members of BANg-NEA pronounced the group’s goal at an event held at Meiji Gakuin University in Tokyo to kick off its efforts. “It is our mission to help realize a world free from all nuclear threats,” they declared.

The objectives of the network include “acting with nonviolence to promote a nuclear-free world” and “conveying to people the danger of nuclear threats and the urgency of arms disarmament.” To translate these objectives into reality, the members will employ a mailing list to share the latest information on nuclear issues, discuss their plans, and organize activities. New members will be sought from both in and out of Japan.

The five founding members of the group include students studying nuclear issues at Meiji Gakuin University, graduates of the school, and peace activists in South Korea. After discovering that the young people they met at the Nuclear Non-proliferation Treaty (NPT) Review Conference and its Preparatory Committee meetings held in the United States and other countries were keenly aware of nuclear issues, the founding members moved to establish a network in Northeast Asia for youth to discuss such issues and help advance a nuclear-free world.

Yusuke Hasunuma, 22, a student in the Faculty of International Studies at Meiji Gakuin University, appealed for others to join the network, saying, “I believe that people’s awareness of nuclear issues is high, in part because of the accident at the nuclear power plant in Fukushima. I hope people will feel free to join the network.” For more information on BANg-NEA, please send a message to wearebangnea@gmail.com.