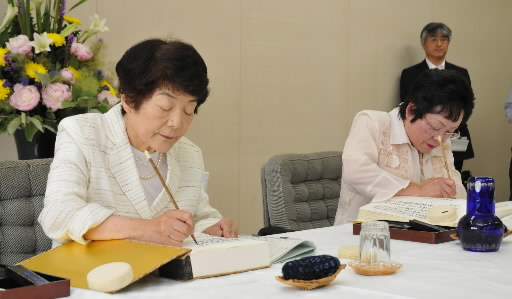 On June 11, the City of Hiroshima began the process of entering new names in the register of the A-bomb victims. The names of A-bomb survivors who have died since last summer, or their deaths from a prior time were recently confirmed, will be added to the register and then placed in the Cenotaph for the A-bomb Victims in Hiroshima Peace Memorial Park on August 6, 2012, the day of the next Peace Memorial Ceremony.

Kazuko Ikegame, 70, and Nobuko Nakamoto, 69, residents of Minami Ward, are working to enter the names in the register at a meeting room in Hiroshima City Hall. Both women are A-bomb survivors and former employees of the City of Hiroshima. After placing their palms together before the register and offering a prayer for the repose of the victims’ souls, they reverently write each name, date of death, and age at the time of death on fine washi paper with a brush and ink. As of June 11, new entries will be made for 3,155 people.

Ms. Nakamoto has performed this duty for the past 12 years. Referring to the accident at the Tokyo Daiichi (No. 1) nuclear power plant which took place 15 months ago, she said, “The people who have suffered as a result of the accident are in my thoughts as well. I will be wishing for a world without nuclear damage as I enter the names of the A-bomb victims.”

According to the City of Hiroshima, there were a total of 275,230 names in the register as of August 5 of last year and the register is now comprised of 100 volumes. One additional volume holds nine names. These nine people experienced the atomic bombing of Nagasaki and the names are included in the Hiroshima register upon the request of their bereaved families.

The City of Hiroshima will accept applications for entry in the register from family members until August 5. Further information can be obtained by contacting the Atomic Bomb Survivors Relief Department at 082-504-2191.