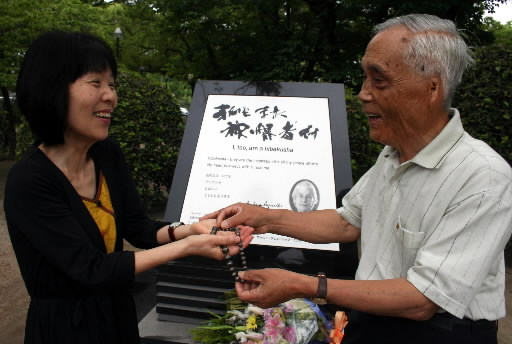 The World Friendship Center (WFC), an NPO based in Nishi Ward, Hiroshima, announced on June 12 that Michiko Yamane, 65, has become the organization’s new chairperson, replacing Hiromu Morishita, 81. Mr. Morishita, an A-bomb survivor and resident of Saeki Ward, Hiroshima, served as chairman for 27 years.

Commemorating the first anniversary of the completion of the monument to the late Barbara Reynolds, an American peace activist and founder of WFC, the NPO held a ceremony in front of her memorial, located near Peace Memorial Park in downtown Hiroshima. Mr. Morishita announced that Ms. Yamane would be taking over the post of chairperson, and he handed her a necklace, a keepsake from Ms. Reynolds. Offering words of encouragement, he said, “Please continue to follow Ms. Reynolds’ spirit.”

WFC was founded in 1965 with the aim of conveying the message of A-bomb survivors to the world. Its activities since that time have included dispatching peace missions to the United States and South Korea and sharing the personal accounts of A-bomb survivors. In 1985, Mr. Morishita took over as chairperson from the late Dr. Tomin Harada, a medical doctor and the first leader of the organization.

In a vote for generational change, WFC chose Ms. Yamane to be the new chairperson in a meeting of its general assembly in May. A resident of Minami Ward, Hiroshima, she has worked as a volunteer interpreter since 1980. Ms. Yamane expressed her enthusiasm for the assignment, saying, “I am taking on a great responsibility, but I would like to continue conveying Hiroshima’s message to the world with the help of our staff. I would also like to strengthen our activities with young people.”