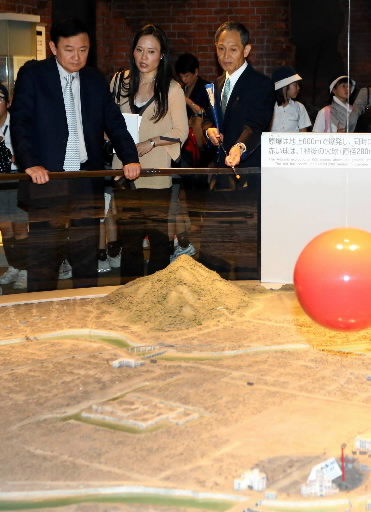 On his tour of Hiroshima Peace Memorial Museum, Mr. Thaksin was guided by museum director Koichiro Maeda and viewed exhibits that include a panoramic model of the city which shows the devastation of the downtown area in the aftermath of the bombing. He gazed intently at A-bomb artifacts, such as roof tiles that bubbled on the surface from the extreme heat of the blast. Mr. Thaksin later offered flowers at the Cenotaph for the A-bomb Victims and prayed for the repose of the victims’ souls.

This is Mr. Thaksin’s first visit to Hiroshima and his stop in Peace Memorial Park was made at his request. “I hope that the nuclear weapon states will gather in Hiroshima for a conference to discuss the abolition of nuclear weapons,” he said.

Mr. Thaksin, now in exile from Thailand after losing power in a coup, arrived in Japan on June 15 for an eight-day trip. On June 21, the day he arrived in Hiroshima, Mr. Thaksin met with executives of companies involved in the automobile industry, businesses which maintain close ties with Thailand. On June 22, he visited the headquarters of the Mazda Motor Corporation.