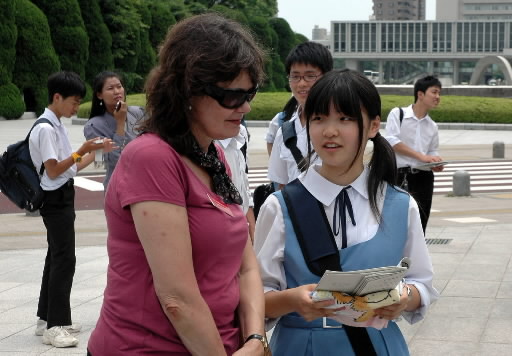 On June 26, 81 third-year students from Mihara Junior High School, a school affiliated with Hiroshima University and located in the city of Mihara in Hiroshima Prefecture, served as guides for international visitors to Hiroshima Peace Memorial Park. The students assisted U.S. educators from Philadelphia, Pennsylvania as well as students from other Asian nations now studying at Hiroshima University. Through this opportunity to guide others, the students strengthened both their interest in peace issues and their ability to express themselves in English.

Divided into 20 groups, the students toured the park with 22 international visitors for approximately an hour, guiding them to the A-bomb Dome, the Children’s Peace Monument, and an A-bombed Aogiri, or Chinese Parasol, tree. Before spending time in the park, the participants chatted over a meal which included okonomiyaki, a local Hiroshima specialty.

Risa Okada, 14, said she told the visitors: “War can change people’s lives in an instant and I think it’s wrong.” With a look of relief, she added, “My English isn’t so good, but I was able to communicate my wish for peace.”

The group of U.S. educators came to Hiroshima as part of a study tour, organized by a Pennsylvania university, which involves visits to five Japanese cities, including Kyoto and Sendai. Natalie Carter, 25, a high school history teacher who was visiting Hiroshima for the first time, said, “The students are friendly and their English is good. I was touched by the story of Sadako Sasaki, who died of leukemia.”