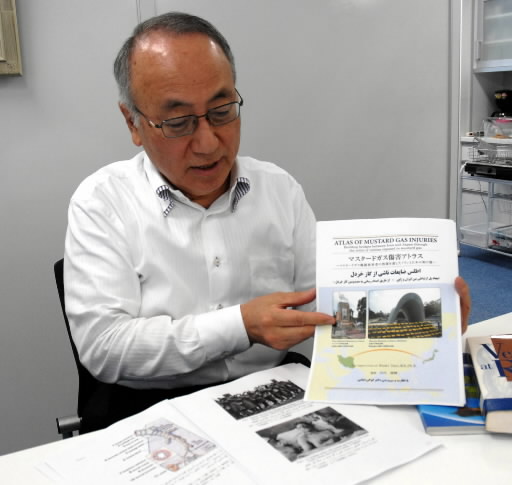 Researchers at Hiroshima University, in cooperation with Iranian doctors, have compiled a book on poison gas injuries observed in Japan and Iran. The researchers gathered information on poison gas injuries from the medical records of former workers at a poison gas factory located on Ohkunoshima Island in Hiroshima Prefecture and this information, coupled with experience, has been used by Hiroshima doctors in providing support to the victims of the Iran-Iraq War (1980-88). The book, which is a compilation of the researchers’ efforts, will be published in Japan and Iran in November.

Titled “Atlas of Mustard Gas Injuries,” the A-4 sized book consists of 316 pages. The trilingual text, which includes Japanese, Persian, and English, describes cases of mustard gas injuries that people of both nations are still suffering from. The book also explains the history and characteristics of poison gases, as well as the history of exchanges between Japan and Iran.

Findings from the joint research undertaken by the two sides are also included in the book. While Iranian victims, who were exposed to large amounts of poison gas in single bomb blasts, suffer mainly from injuries to their skin and eyes, many workers at the poison gas factory on Ohkunoshima Island, who were exposed to small amounts of poison gas over a longer period of time, have developed lung cancer and cancers affecting other organs.

Encouraged by MOCT, an NPO based in Higashi Ward, Hiroshima, which has been bringing Iranian poison gas sufferers to Hiroshima, Hiroshima doctors have been paying visits to Iran and promoting cooperation in their field with their Iranian counterparts since 2005.

“We explained things in simple language so people without a medical background can understand,” Professor Inai said. “I hope our book will contribute toward helping the victims.”