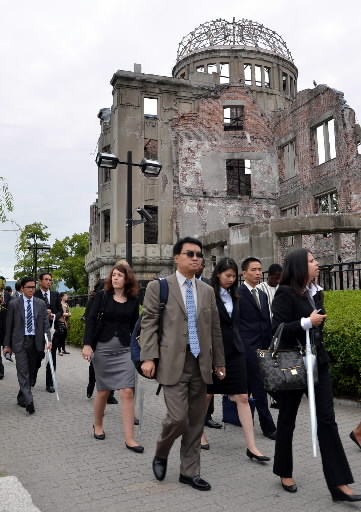 Young diplomats from 25 nations visited Hiroshima Peace Memorial Park in downtown Hiroshima on September 29. The diplomats are taking part in the UN Disarmament Fellowship Program, which seeks to nurture disarmament experts. This is the 30th annual visit to Hiroshima as part of the program. The participants have had the chance to gain a deeper understanding of the damage inflicted by the atomic bomb, learn from mementos of the victims on display at Hiroshima Peace Memorial Museum, and hear the account of an A-bomb survivor firsthand.

Each nation involved, including Japan, Cuba, and the nuclear weapon states of China and India, has sent one diplomat to take part. The diplomats visited the A-bomb Dome, toured the museum, and offered flowers to the Cenotaph for the A-bomb Victims. They also learned about the efforts being made by Mayors for Peace, currently numbering 5,400 member cities in Japan and abroad, to realize the abolition of nuclear weapons.

At the Hiroshima National Peace Memorial Hall for the Atomic Bomb Victims, the participants listened to Keijiro Matsushima, 83, a resident of Saeki Ward, share his experience of the atomic bombing in English. Mohamed Lamine Siari, 27, from Algeria commented, “Hiroshima is a significant place for those who are involved in disarmament,” adding that he has been inspired to work even harder to help eliminate nuclear weapons and build peace in the world.

The Disarmament Fellowship Program was launched in 1979, and every year since 1983 groups of participants have paid visits to Hiroshima. To date, a total of 773 diplomats have taken part in the program. Some of the former participants have attended the city’s Peace Memorial Ceremony, held each year on August 6, as representatives of their nations.