Hammer used by Floyd Schmoe, builder of homes for A-bomb survivors, is donated for display 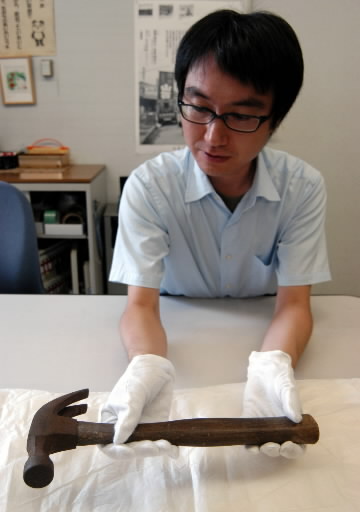 A hammer used by the late Floyd Schmoe (1895-2001) has been donated to the City of Hiroshima. The American peace activist built houses for A-bomb survivors in Hiroshima after the war. The hammer had been given to and preserved by Yuzo Yamamoto, 80, a resident of Higashi Ward, who took part in the construction work. The city has decided to display the hammer at the Schmoe House, which will open in the Eba Nihonmatsu area in Naka Ward on November 1 as an exhibition facility affiliated with Hiroshima Peace Memorial Museum.

The hammer is 33 centimeters long and has the name of an American tool maker, “CRAFTMAN,” stamped on the side.

Mr. Schmoe and his volunteers built 21 structures for A-bomb survivors between 1949 and 1953 in three areas of the city. The structures were used as homes and gathering places. Mr. Yamamoto pitched in with the construction work because he was interested in learning English. In 1953, after the last house was completed in the Ushita area, part of Higashi Ward, he was given the hammer.

The city has decided to make the only existing structure built by Mr. Schmoe an exhibition facility where information on foreign nationals who have supported Hiroshima’s postwar reconstruction will be displayed. Learning about the opening of the facility, Mr. Yamamoto decided to donate the hammer. He commented, “I would like people to learn about Mr. Schmoe’s compassionate character and tremendous achievements.”