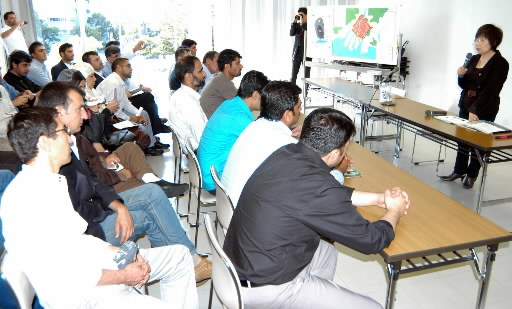 About 80 government officials from Afghanistan listened to an A-bomb survivor share her account and learned about Hiroshima’s post-war reconstruction at the International Conference Center Hiroshima on October 3. The session was part of a training program organized by the Hiroshima Office of the United Nations Institute for Training and Research (UNITAR).

Keiko Ogura, 75, was exposed to the atomic bombing in the Ushita area (now Higashi Ward), 2.4 kilometers from the hypocenter. She told the Afghan officials: “The A-bomb survivors have been conveying our experiences in hopes of a peaceful future. We can impact the future. No more children should go through what we experienced.”

Fardin Sediqi, 37, Director General for Policy Execution in the Ministry of Finance, commented, “I’ve been encouraged. I’ll spread the message of the survivors in my own country.”

The UNITAR Hiroshima Office launched an effort to support Afghanistan’s reconstruction in fiscal 2003. The participants arrived in Hiroshima on September 29, and the training program will last until October 6.