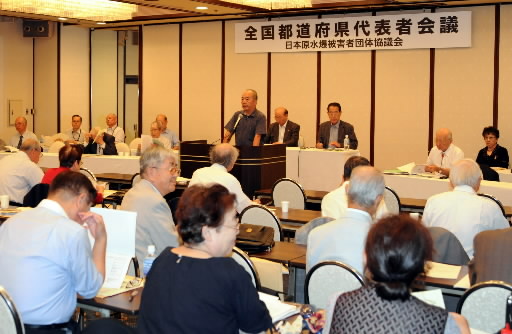 On October 4, the Japan Confederation of A- and H-Bomb Sufferers Organizations (Nihon Hidankyo) held a meeting in Tokyo, where representatives from each prefecture exchanged views on their efforts aimed at breaking away from the nation’s use of nuclear power.

About 100 members from around the nation, including A-bomb survivors and second-generation A-bomb survivors, attended the meeting. Reports were made on such matters as a prefectural referendum on whether operations should be resumed at the Kashiwazaki-Kariwa nuclear power plant in Niigata Prefecture, and the current status of a local chapter’s activity concerning a lawsuit seeking the suspension of operations at the Ikata nuclear power plant in Ehime Prefecture.

It was also agreed that, on the same day, Nihon Hidankyo will make a request to the government to conduct cancer checkups for second-generation A-bomb survivors as part of an effort to enhance support measures for survivors of the bombings.