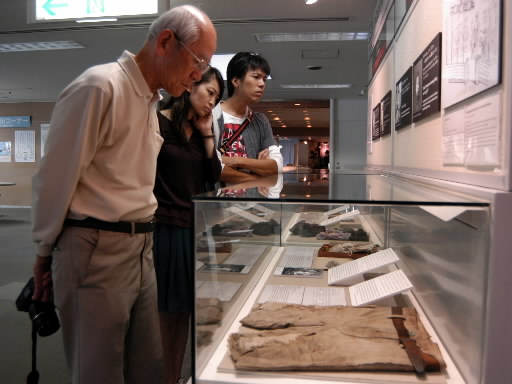 A special exhibition featuring the mementos and last words of children who perished in the atomic bombing is being held at Hiroshima Peace Memorial Museum. Curators at the museum are urging people to visit the exhibition and imagine what they would feel if these children were part of their own family.

Six items, from four children, were selected for the exhibition from donations. Next to photographs of the children are their last words, taken from personal notes provided by parents and siblings.

A faded holder for a commuter pass once belonged to Kazuo Kijima, who was 15 years old when the atomic bomb exploded. He was trapped under a collapsed railway station building in the Yokogawa area (now part of Nishi Ward), which became engulfed in flames. Knowing he would not survive, he asked a police officer, who was trying to help free him, to deliver his pass holder to his family living on the nearby island of Miyajima.

Yasuyoshi Amano was 13 when he experienced the atomic bombing in the Zakoba district (now part of Naka Ward). Mementos of his life include a picture of a hat he painted and a box of marbles. While hovering between life and death two days after the bombing, he uttered his last words in a state of delirium. He said that his father, who had died in the year he was born, was waiting for him.

The special exhibition is taking place in a part of the museum dedicated to presenting artifacts from the museum’s collection. Such exhibitions change every six months. The current exhibition will run until April 11, 2013.