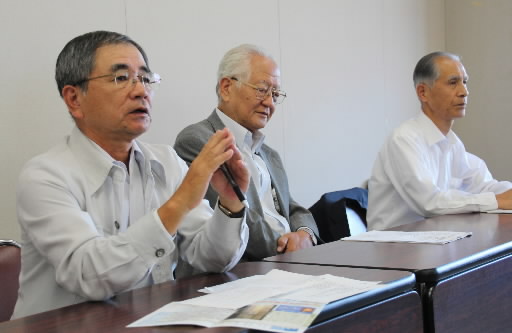 Hiroshi Kajioka, 62, a member of a local antinuclear group and resident of Aki Ward, Hiroshima, will be dispatched to the First Committee of the United Nations General Assembly, which will open on October 8 in New York City. The decision to send Mr. Kajioka, who is deputy head of Hiroshima Hidankyo’s peace studies section, was made by the Hiroshima chapter of the Japan Council Against A- and H-bombs (Gensuikyo) and the Hiroshima Prefectural Confederation of A-bomb Sufferers Organizations (Hidankyo), chaired by Kazushi Kaneko. Mr. Kajioka will join the delegation from Nihon Hidankyo, a national organization, and urge the nations of the world to enter into negotiations to conclude a nuclear weapons convention.

This is the second time that Nihon Hidankyo is sending a delegation to the first committee, which will discuss the issue of nuclear arms reduction. Seven people from around the country, including Mr. Kajioka, have been selected to undertake this trip. They will visit the permanent missions of various countries to call for their support and will also submit 2.2 million signatures, collected in a bid to urge the start of negotiations, to Angela Kane, U.N. High Representative for Disarmament Affairs.

Since retiring in 2010, Mr. Kajioka, a former elementary school teacher, has been serving as a guide for students visiting Hiroshima on school trips, guiding them to the Cenotaph for the A-bomb Victims and other A-bomb monuments. During a press conference held at Hiroshima City Hall, Mr. Kajioka said, “I would like to convey to the delegates from different nations the reactions, and changes, I have seen in children when they visit Hiroshima.”