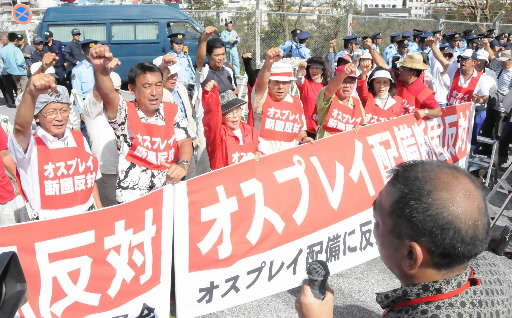 Twelve MV22 tilt-rotor Osprey transport aircraft, which first entered Japan by way of the U.S. Marine Iwakuni Air Station in the city of Iwakuni, have completed their move to the Futenma Air Station in Ginowan City, Okinawa Prefecture. Futenma Air Station is the site for their deployment and the aircraft will soon begin full-scale operations. In the midst of mounting concerns over the safety of the Osprey, voices contending that the deployment “is akin to discrimination” are escalating in Okinawa. The strong anger elicited by the deployment is further widening the gap in perspective between Okinawa and mainland Japan.

On October 1, the day the Osprey flew to Okinawa, dozens of people staged a protest at the entrance to Iwakuni Air Station. On the same day, at the gates of the Futenma Air Station in Okinawa, about 400 demonstrators held their fists in the air and shouted, “We must fight the deployment until it’s canceled.” Among the many senior citizens taking part in the protest, one man said, “I don’t care what happens to me. I’m protesting for the sake of my children and grandchildren.”

After the war, 74 percent of all the U.S. bases in Japan were thrust upon Okinawa. What’s more, the people of Okinawa are now forced to accept the deployment of the Osprey, an aircraft that has been beset by a series of crashes in other locations. With their deployment at the Futenma Air Station, situated in a downtown urban area, the Osprey have made their home at a base dubbed “the most dangerous air station in the world.” In fact, in 2004 an accident occurred and a U.S. helicopter crashed onto the campus of Okinawa International University, adjacent to the air station.

The people of Okinawa have also been horrified by the crimes committed by U.S. troops there. Memories of the rape of a 12-year-old girl by three American soldiers in 1995 are still fresh. A housewife, 61, who joined the sit-in at the gates of the Futenma Air Station, revealed, “When I was a child, I hid when I saw the U.S. vehicles because I was afraid of getting raped.”

Rie Ishihara, 48, lives in the village of Higashison in the northern part of Okinawa’s main island, where the Osprey’s flight drills will be performed once full-scale operations commence. “With the deployment in Okinawa now completed,” she said, “the people on the mainland will return to their normal mindset, unconcerned about this disastrous thing because it’s taking place far away from them.”

In a keynote speech given at a gathering of those in the media on September 26 in Naha City, Masahide Ota, the former governor of Okinawa Prefecture, said, “Japan has not treated the people of Okinawa like human beings. Japan has simply taken advantage of Okinawa for the benefit of the majority.” Mr. Ota went on to say, describing the sentiment of mainlanders toward the island inhabitants: “Under a democratic system determined by the rule of the majority, a framework has been established under which Okinawa suffers from structural discrimination.”

Concerning the Osprey’s flights while in Iwakuni, some people spotted the aircraft flying over residential areas that were supposed to have been off-limits. Such incidents offer a glimpse into possible scenarios that may occur nationwide in the future. Are we to categorize this matter as an issue involving Okinawa alone, where the Osprey has been deployed, or will we question anew the deployment as a national concern? It can be said that this deployment has stirred questions regarding Japan’s current national security and national defense, which are maintained by placing heavy burdens on particular parts of the nation.

Taking part in a rally held in front of the gates to the Futenma Air Station on September 28, Takeshi Onaga, the mayor of Naha City, stressed to the media, “Iwakuni must accept the Osprey in order to create momentum for people all over Japan to reconsider our national security.” It was an anguished cry to the people of mainland Japan, who look away from the reality of Okinawa, from this place of heavy burdens.