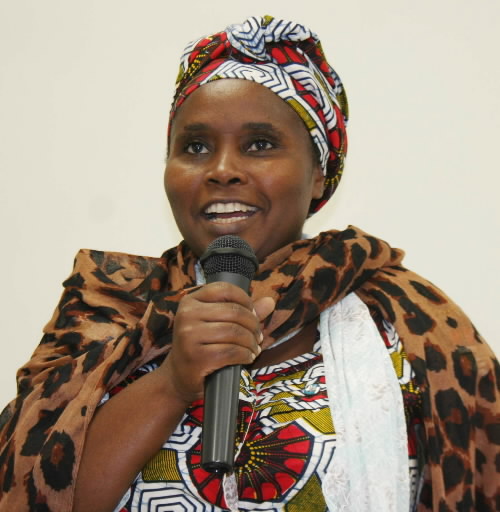 Kambenga Marie Louise, 47, president of “Think About Education in Rwanda,” an NPO based in the city of Fukushima, spoke at the RCC Bunka Center in downtown Hiroshima on October 13. From her experience surviving the Rwandan genocide, she stressed that equal opportunities for education bring hope and happiness to children, and ultimately lead to peace. Almost one million people lost their lives in Rwanda as a result of ethnic conflict.

In 1994, when the country became embroiled in genocide, Ms. Marie Louise fled Rwanda for neighboring Congo (formerly Zaire). Later she came to Japan, her second stay here. Looking back on Rwanda’s past, she said, “Even though we were poor, if everyone had had an equal opportunity for education, I don’t believe civil war would have broken out.”

Since establishing her NPO, Ms. Marie Louise has helped construct a school in her homeland. She shared stories of her experiences in education, including one about a boy who doubted he would survive to adulthood because of the harsh conditions under which he lived. But after he began attending school, he came to dream of becoming a teacher.

Ms. Marie Louise also referred to the Great East Japan Earthquake and the accident at the nuclear power plant that has made misery in Fukushima, where she lives. She said she has been visiting people who live in temporary housing, bringing them folded paper cranes sent from Rwandan children to offer encouragement to the victims of the disaster. “I hope the children can live with peace of mind, without being frightened by the radiation,” she said. “We can’t change the past, but we can regain our hope.”

Ms. Marie Louise’s lecture was organized by the Hiroshima prefectural committee for UNICEF as part of a program to contemplate the importance of education. About 40 people listened closely to the talk.

Kambenga Marie Louise
Kambenga Marie Louise was born in October 1965 in Congo (formerly Zaire), where her Rwandan parents lived at the time. She began teaching dressmaking at a vocational school in Kigali, the capital of Rwanda, in September 1986. In May 1993, she traveled to the city of Fukushima to receive training in dressmaking as a local supporter of the Japan Overseas Cooperation Volunteers. She then returned to Rwanda in February 1994. After genocide broke out, she fled to Congo. In December 1994, she moved to Fukushima with her husband and three children, supported by friends in Japan. She established “Think About Education in Rwanda” in 2000. She is a resident of Fukushima.