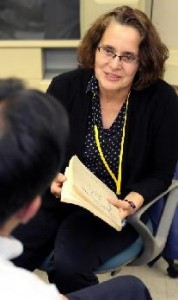 Ann Sherif, professor of Japanese culture at Oberlin College in the U.S. state of Ohio, is writing a dissertation on the relationship between atomic bomb literature and the reconstruction of Hiroshima after the war. Professor Sherif has been studying writers and other figures who were exposed to the atomic bombing of Hiroshima, including the writer Tamiki Hara. Seeking to complete her dissertation by the end of this year, she has paid a number of visits to Hiroshima to gather related material and hear relevant stories.

During her visit to Hiroshima this fall, the fourth such trip since beginning her research in the summer of 2010, Professor Sherif mainly studied the coverage of this theme by the Chugoku Shimbun. In particular, she delved into the role of the late Toshihiro Kanai (1914-1974), whose work formed the foundation for A-bomb journalism. Mr. Kanai was the chief editorial writer of the Chugoku Shimbun and he actively covered atomic bomb literature for the newspaper. Professor Sherif read letters and documents between Mr. Kanai and writers of the time, which had been donated to the Hiroshima University Archives in the city of Higashihiroshima, and listened to his achievements from the people concerned.

In her research, Professor Sherif has learned that the journalist not only made an impact through his words, he also took direct action on many occasions. As one example, he worked hard to found the Hiroshima P.E.N. Club in 1949, an organization whose membership gathered materials on the atomic bombing by deepening their ties with cultural figures.

“I now understand more clearly the role that Mr. Kanai played in proactively assisting writers in Hiroshima,” Professor Sherif said, “as he sought to raise public awareness for the abolition of nuclear weapons and support for the A-bomb survivors.” With the realization that atomic bomb literature was a psychological contribution to the reconstruction of the city, she will move to complete her dissertation.