A-bomb account of survivor living in U.S. is captured on video 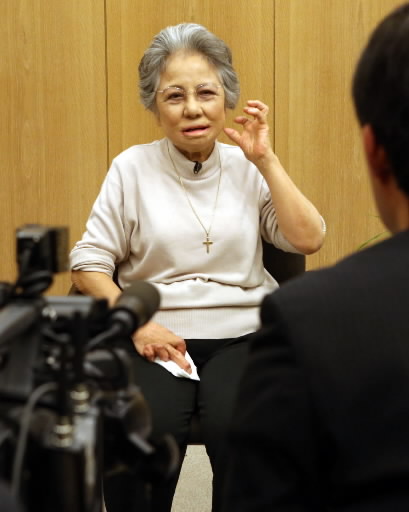 Shigeko Sasamori, 80, who was exposed to the atomic bombing of Hiroshima and subsequently traveled to the United States to undergo treatment for keloids, was videotaped relating her A-bomb account on October 19. The Hiroshima National Peace Memorial Hall for the Atomic Bomb Victims, located in downtown Hiroshima, had requested that Ms. Sasamori, a resident of the U.S. state of California, provide her testimony as an survivor living overseas.

Standing before the camera, Ms. Sasamori said, “As someone who managed to survive the atomic bombing, my mission is to convey the preciousness of life.” She took part in the videotaping during a visit to Japan.

Ms. Sasamori was 13 years old at the time of the bombing. She experienced the blast while helping to dismantle buildings to create a firebreak near the Tsurumi Bridge, located in present-day Naka Ward. She suffered severe burns to her face and other parts of her body. She recalled the day she looked at her face in the mirror, revealing to the camera, “The shocking sight horrified me.”

Ms. Sasamori was among the 25 women who survived the atomic bombing and traveled to the United States in 1955 to receive medical treatment, a project launched by Norman Cousins, an American journalist. After returning to Japan, she revisited the United States and was adopted by Mr. Cousins. She then worked as a nurse while raising her own child. Gazing at the camera, she stressed, “With love and consideration, there will be no war.”

Ms. Sasamori has previously related her account of the devastation wrought by the atomic bombing in talks given in the United States and other countries. She also appeared in the documentary film entitled “White Light/Black Rain,” which was directed by Steven Okazaki, a third-generation Japanese-American.